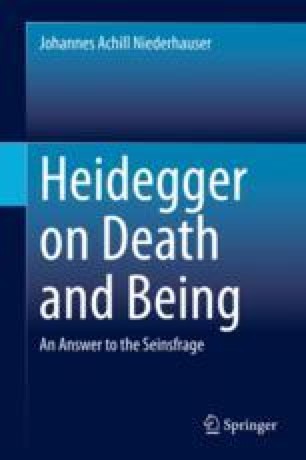 Until now I have not mentioned a phenomenon which one might expect should play a pivotal role when dealing with the question of death. That is, of course, the phenomenon of birth. To a certain degree birth is enshrined in the notion of thrownness. Thrownness is, as it were, the existential-ontological notion of birth, for thrownness means that Dasein is and that Dasein is always already factically in the world, bound up in indebted relationships (cf. SZ: 135/127). But Heidegger does appreciate birth in its own right and he does so in the analytic of history in the fifth and last chapter of Being and Time. This last chapter is the culmination of ecstatic emporality arguably. In fact, Heidegger develops Dasein’s historicity in light of his analysis of birth. I shall now reconstruct this final argument of Being and Time and bring to bear its importance for Heidegger’s later idea of the history of being. Note that Heidegger later speaks of “another beginning” of the history of being and of thinking that human beings need to heed. In the context of the history of being I understand “another beginning” as a name for “birth.” Heidegger’s focus on Dasein’s historicity plays a pivotal part for his later articulation of Seinsgeschichte. The history of being will be a central issue in Part II.