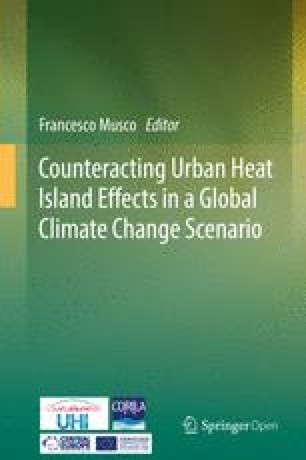 Decision Support System (DSS) is an interactive software-based tool that has been realized in the framework of the project “Development and application of mitigation and adaptation strategies for counteracting the global Urban Heat Islands phenomenon (UHI)” implemented through CE programme 2007–2013 co-financed by the ERDF. DSS is a simplified database management tool that allow the use of the project deliverables uploaded on the web sites with a user-friendly approach.

Users can access to the needed project’s output through knowledge’s needs oriented pathway.

The construction of Decision Support System (DSS) has been realized in the framework of the Work Package 6 (WP6), in particular with the action 6.1.

The main activity of the WP6 was the UHIs simulation of future alternative scenarios related to the development of the urban areas chosen for the eight pilot actions.

In addition, WP6 was intended to define and realize a set of support actions for fostering the implementation of urban & spatial planning strategies in each involved region.

In particular, it was foreseen a progressive integration of mitigation and adaptation strategies in current urban planning tools.

Furthermore, DSS is designed to address policies in actions of mitigation and adaptation in the framework of the Urban Heat Island phenomenon.

5.2 Development of the UHI Project’s DSS

During the project implementation the partners agreed to choose the hypothesis described below:

A simplified database management tool that allow the use of the project deliverables uploaded on the web sites with a user-friendly approach.

In this case users can access to the needed project’s output through knowledge’s needs oriented pathway.

To manage the urban development it is compulsory to manage a multitude of purposes and address many different goals, often conflicting, to satisfy the needs of different stakeholders. This poses considerable challenges to policy makers and urban planner. The need for enhanced urban plan decision support systems is evident in the same complexity of the UHI phenomenon.

In the following paragraphs is described the operation of the DSS chosen within the project on UHI.

The UHI DSS is composed by a structure of html, javascript and php files that allows, via communication with a database, the end users to remotely access the project deliverables produced by UHI partners. In fact, considering the type of files and its structure, the software is a website, that can be installed and run on any platform that provides services http and MySQL.

The logical structure of the files is likely (Fig. 5.1):
From the home page (index.html) you can access to:

The two php files (query.php and print.php) shall only be used to query the database that stores the data that is composing the report: in this case, query.php is part of the communication AJAX of the page consultation.html (through script.js); while print.php dynamically creates a page report based on the choices you make, whether they come from the DSS or from the Consultation Tool.

The database named db_dss_uhi is composed of five separate tables:

This paragraph shows the real functioning of the DSS as was finally built with the help of the below pictures.

The link of the DSS can be found on the homepage of the UHI website (Fig. 5.2).
By clicking on the link highlighted above, the first page of the DSS appears like this (Fig. 5.3):
As the user can immediately see, from this page you can enter other three links to three different tools:

Clicking on the left icon below, the user can have an overview of the entire UHI project (Fig. 5.4).
As shown in the picture below in this page the user can find: a brief description of the project; the partnership; the framework analysis; the establishment of a UHI monitoring network; mitigation and adaptation strategies; pilot and capitalization actions for limiting UHI’s effects (Fig. 5.5).

The interface of the Consultation Tool consists of 7 menus, multiple choice or drop-down menu, in which user is asked to select some areas of interest (Fig. 5.6).
The following pictures show how are graphically displayed the contents above outlined (Figs. 5.7, 5.8 and 5.9).

Once required the information requested by the user, the software searches in the documents produced in the WPs of the project the material/documentation or deliverable (re-organized in a logical framework); this content has been revised in order to obtain a final compact document with all the information selected. The results are finally displayed in html pages for instant opening for a quick reference, then the user can print it as a pdf.

By clicking the icon in the middle of the screen, user is led within the DSS.

By clicking on the different menu items the user can simulate the approach to his pilot study based on the data we gathered in our 8 pilot tests (Fig. 5.10).
This section has 5 menus:
After entering a few data, the software proceeds a quick calculation of the action selected.

The selections made in the menus help to match with the material presented above, relating them in a logical way.

This tool aims at presenting the same data of the Consultation Tool but in a more organic way: a combination of a raw data and documents selected shape a report and finally a model.

Indeed the choices are collected and reported in a final html page as a report.

The inputs of the DSS are all data stored in the database that contribute for processing the final information. In our case inputs are established based on the work developed in the previous Work Packages: WP3, WP4, and WP5.

From the above-cited WPs here follows a synthesis of the most important aspects necessary to set up the DSS.

WP3 was divided in 2 main actions:
The analysis take into account both (1) technical-scientific issues and (2) urban planning and land use regulation.

In summary, tasks of WP3 were to provide the collection of techniques to assess the UHI phenomenon from which a selection have been chosen to be implemented in DSS. Moreover WP3 analyzes the European and local legislation within which decisions can be taken and from which DSS development is dependent.

Another important topic is the connection between UHI and climate change. Climate change will amplify the UHI phenomenon and its consequences for environment and human health have to be carefully taken into account. DSS has to consider then the projections to future scenarios to manage more useful information for administrators and stakeholders.

A large work to be implemented in DSS comes also from WP4 that is divided in three main actions.

In summary from WP4 we acquired for DSS the gold standard to define and to monitor UHIs with common and accepted rules. Moreover Act. 4.3 gave rise to the web database from which DSS will acquire information for model running.

Starting from scientific and institutional framework and from assessment tools provided by previous WPs 3, 4, WP5 was focused on approaches to model for long-terms mitigation strategies and short-medium-term adaptation strategies to encounter UHI.

WP5 deals with the following specific questions: Given the results of WPs 3 and 4:

How could “top-down” (low-resolution) meteorological prediction models and bottom-up (high-resolution) building models be combined to provide an environment modelling for parametric study of the aforementioned mitigation and adaptation measures and strategies?

Having identified a coupled top-down and bottom-up UHI modelling environment, what would be the outcome and implications (recommendations, guidelines) of the parametric modelling studies of alternative mitigation and adaptation measures?

Open Access This chapter is distributed under the terms of the Creative Commons Attribution 4.0 International License (http://creativecommons.org/licenses/by/4.0/), which permits use, duplication, adaptation, distribution and reproduction in any medium or format, as long as you give appropriate credit to the original author(s) and the source, a link is provided to the Creative Commons license and any changes made are indicated.The images or other third party material in this chapter are included in the work’s Creative Commons license, unless indicated otherwise in the credit line; if such material is not included in the work’s Creative Commons license and the respective action is not permitted by statutory regulation, users will need to obtain permission from the license holder to duplicate, adapt or reproduce the material.

This chapter is distributed under the terms of the Creative Commons Attribution 4.0 International License (http://creativecommons.org/licenses/by/4.0/), which permits use, duplication, adaptation, distribution and reproduction in any medium or format, as long as you give appropriate credit to the original author(s) and the source, a link is provided to the Creative Commons license and any changes made are indicated.

The images or other third party material in this chapter are included in the work’s Creative Commons license, unless indicated otherwise in the credit line; if such material is not included in the work’s Creative Commons license and the respective action is not permitted by statutory regulation, users will need to obtain permission from the license holder to duplicate, adapt or reproduce the material.