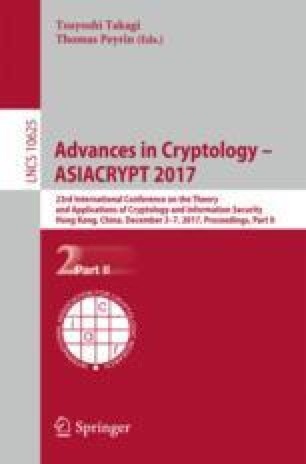 ABE with Tag Made Easy

J. Chen—School of Computer Science and Software Engineering. Supported by the National Natural Science Foundation of China (Nos. 61472142, 61632012) and the Science and Technology Commission of Shanghai Municipality (No. 14YF1404200). Homepage: http://www.jchen.top.

An attribute-based encryption [BSW11] (ABE) is an advanced cryptographic primitive supporting fine-grained access control.1 Such a system is established by an authority (a.k.a. key generation center, KGC for short). On a predicate \({\mathsf {P}}: {\mathcal {X}}\times {\mathcal {Y}}\rightarrow \{0,1\}\) (and other system parameter), the authority publishes master public key \(\textsf {mpk}\). Each user will receive a secret key \({\textsf {sk}}_{y}\) associated with a policy \(y \in {\mathcal {Y}}\) when he/she joins in the system. A sender can create a ciphertext \({\textsf {ct}}_x\) associated with an attribute \(x \in {\mathcal {X}}\). A user holding \({\textsf {sk}}_{y}\) can decrypt the ciphertext \({\textsf {ct}}_x\) if \({\mathsf {P}}(x,y)=1\) holds, otherwise he/she will infer nothing about the plaintext. This notion covers many concrete public-key encryptions such as identity-based encryption [Sha84] (IBE), fuzzy IBE [SW05], ABE for boolean span program [GPSW06] and inner-product encryption [KSW08] (IPE).

The basic security requirement is collusion-resistance. Intuitively, it is required that two (or more) users who are not authorized to decrypt a ciphertext individually can not do that by collusion either. The notion is formalized via the so-called adaptive security model [BF01] where the adversary holding \(\textsf {mpk}\) can get secret keys \({\textsf {sk}}_{y_1},\ldots ,{\textsf {sk}}_{y_q}\) for \(y_1,\ldots ,y_q \in {\mathcal {Y}}\) and a challenge ciphertext \({\textsf {ct}}^*\) for target \(x^* \in {\mathcal {X}}\) via key extraction queries and challenge query respectively. We emphasize that the adversary can make oracle queries in an adaptive way. Although several weaker security models [CHK03, CW14] were introduced and widely investigated, this paper will focus on the adaptive security model.

Dual System Methodology and Predicate Encoding. A recent breakthrough in this field is the dual system methodology invented by Waters [Wat09] in 2009. He obtained the first adaptively secure IBE construction with compact parameters under standard complexity assumptions in the standard model. Inspired by his novel proof technique, the community developed many ABE constructions in the next several years. More importantly, the dual system methodology finally led us to a clean and systematic understanding of ABE. In 2014, Wee [Wee14] and Attrapadung [Att14] introduced the notion of predicate encoding 2 and proposed their respective frameworks in the composite-order bilinear group. For certain predicate, if we can construct a predicate encoding for it, their frameworks will immediately give us a full-fledged ABE scheme for the predicate. This significantly simplifies the process of designing an ABE scheme. In fact the powerful frameworks allow them to give many new concrete constructions.

As Wee pointed out in his landmark work [Wee14], the framework reflects the common structures and properties shared among a large group of dual-system ABE schemes while predicate encodings give predicate-dependent features. More concretely, investigating the IBE instance derived from a framework will show the basic construction and proof technique captured the framework, then developing and analysing various predicate encodings will tell us how to extend the IBE instance to more complex cases.

ABE with Tag. The proof technique behind all these frameworks can be traced back to the work from Lewko and Waters [LW10, LW12] and their variants. However there are two dual-system IBE schemes located beyond these frameworks: one is the first dual-system IBE by Waters [Wat09] and the other one is the IBE scheme based on quasi-adaptive non-interactive zero-knowledge (QA-NIZK) proof by Jutla and Roy [JR13]. In this paper, we call them \(\mathsf {Wat}\)-\(\mathsf {IBE}\) and \(\mathsf {JR}\)-\(\mathsf {IBE}\), respectively, for convenience.

Apart from several group elements as usual, a ciphertext and/or a key of \(\mathsf {Wat}\)-\(\mathsf {IBE}\) and \(\mathsf {JR}\)-\(\mathsf {IBE}\) also include an integer which is called tag. This distinguishes them from other dual-system IBE schemes. We must emphasize that the tag plays an important role in the security proof and results in a different proof technique. Therefore we believe they deserve the terminology IBE with tag or tag-based IBE. Accordingly, an ABE with a tag in the ciphertext and/or key will be called ABE with tag or tag-based ABE.

One may notice that there is no framework based on \(\mathsf {JR}\)-\(\mathsf {IBE}\) and all previous extensions were obtained in a somewhat ad-hoc manner. This immediately arises our first question.

Question 2: Is there any limitation on the predicate for tag-based ABE?

In this paper, we propose a new framework for tag-based ABE. The framework is based on \(\mathsf {JR}\)-\(\mathsf {IBE}\) and can work with the predicate encoding defined in [CGW15]. The adaptive security in the standard model (without random oracles) relies on the k-linear assumption (k-Lin) in the prime-order bilinear group. Our framework is also compatible with attribute-hiding predicate encoding from [CGW15] and implies a family of tag-based ABE with weak attribute-hiding feature. Here weak attribute-hiding means that ciphertext \({\textsf {ct}}_x\) reveals no information about x against an adversary who are not authorized to decrypt \({\textsf {ct}}_x\).

With this technical result, we are ready to answer the two questions:

Our framework itself readily gives an affirmative answer to the question. Luckily, by defining new concrete predicate encodings motivated by [Ram16, RS16], our framework is able to cover these previous tag-based ABE. In order to capture the HIBE schemes proposed in [RS14], we need to extend both the framework and the predicate encoding to support predicate with delegation. (See Sect. 6.) However we note that Ramanna’s first tag-based IPE [Ram16] and Ramanna and Sarkar’s second identity-based broadcast encryption with tag [RS16] still fall out of our framework because they involve further developments of \(\mathsf {JR}\)-\(\mathsf {IBE}\)’s proof technique which has not been captured by our framework.

We highlight that both Chen et al.’s framework without tag [CGW15] and our tag-based framework are compatible with the predicate encoding described in [CGW15] (and its attribute-hiding variant). This answers Question 2 with negation, that is there should be no restriction on predicates for tag-based ABE. Concretely, we can construct a series of new tag-based ABE schemes including ABE for boolean span program (for both key-policy and ciphertext-policy cases; see Sect. 5) thanks to concrete encodings listed in [CGW15].

In general, our framework has shorter master public key and shorter ciphertexts than the CGW framework at the cost of slightly larger secret keys. We highlight that the cost we pay here is constant for specific assumption (i.e., consider k as a constant) while the improvement we gain will be proportional to n and \(|\mathsf {sE}|\), respectively. In fact our work can be viewed as an improvement of CGW framework using the tag-based technique underlying \(\mathsf {JR}\)-\(\mathsf {IBE}\) and improves a family of concrete ABE constructions in a systematic way.

Proof Blueprint. Our proof mainly follows the tag-based proof strategy given by Jutla and Roy [JR13] which basically employs the dual system methodology [Wat09]. The first step is to transform the normal challenge ciphertext (see the real system above) into the semi-functional (SF) one:
Open image in new window

where \({\mathbf {a}^{\scriptscriptstyle {\perp }}}\leftarrow {\mathbb {Z}}_p^{k+1}\) with \(\mathbf {A}^{\!\scriptscriptstyle {\top }}{\mathbf {a}^{\scriptscriptstyle {\perp }}}= {\mathbf {0}}\) and \(\alpha \leftarrow {\mathbb {Z}}_p\). As usual, the conversion will be done in a one-by-one manner. That is we deal with single secret key each time which arises a security loss proportional to the number of secret keys sent to the adversary. When all secret keys and the challenge ciphertext become semi-functional, it would be quite direct to decouple the message m from the challenge ciphertext which implies the adaptive security.

Tag-Based Technique, Revisited. In fact what we have described still follows [CGW15] (and most dual-system proofs [Wat09]). However the proof for the indistinguishability between normal and SF secret key heavily relies on the tag as [JR13] and deviate from [CGW15].

Since the work by Wee [Wee14] and Attrapadung [Att14], predicate/pair encodings and corresponding generic frameworks have been extended and improved via various methods [CGW15, AC16, Att16, AC17, ABS17]. Before that, there were many early-age ABE from pairing such as IBE [BF01, BB04b, BB04a, Wat05, Gen06], fuzzy IBE [SW05], inner-product encryption [KSW08, OT12], and ABE for boolean formula [GPSW06, OSW07, BSW07, OT10, LOS+10, Wat11, LW12]. Most of them has been covered by generic frameworks. Attrapadung et al. [AHY15] even gave a generic framework for tightly secure IBE based on broadcast encodings and reached a series of interesting constructions. However IBE schemes with exponent-inverse structure [Gen06, Wee16, CGW17] are out of the scope of current predicate encodings, and we still have no framework supporting fully attribute-hiding feature [OT12].

We review the matrix decisional Diffie-Hellman (MDDH) assumption in the prime-order bilinear groups as follows.

This subsection reviews the notion of predicate encoding [Wee14, CGW15] and shows some useful notations and facts.

Concrete Instantiations. As an example, we show the predicate encoding for equality predicate as below. This is the simplest encoding and extracted from classical Lewko-Waters IBE [LW10].

3 ABE with Tags from Predicate Encodings

Our generic tag-based ABE from predicate encodings is described below.

Properties and Facts for Correctness.

Security Result. We give the following main theorem stating that the above generic tag-based ABE scheme is adaptively secure under standard assumption in the standard model. The remaining of this section will be devoted to the proof of the main theorem.

where \(\alpha \leftarrow {\mathbb {Z}}_p\). Note that all semi-functional secret keys in the system will share the same \(\alpha \).

This subsection proves the indistinguishability of \(\mathsf {G}_{2.i}\) and \(\mathsf {G}_{2.i+1}\). We introduce an auxiliary game sequence which is based on the proof idea from Jutla and Roy [JR13]. In particular, we need the following two auxiliary distributions.

With the extended game sequence, we will prove that
Open image in new window

In this section we will exhibit two tag-based ABE for boolean span program derived from our generic tag-based ABE and two concrete encodings in [CGW15].

6 How to Support Predicate Encoding with Delegation

Our framework shown in Sect. 3 and extended in Sect. 4 cannot cover the HIBE schemes proposed by Ramanna and Sarkar [RS14]. This section further develops the framework and predicate encoding to accommodate the delegation mechanism in HIBE system.

Construction. Our tag-based ABE supporting delegation is as follows. We highlight all terms we add for delegation in the dashboxes.

We want to thank Benoît Libert, Somindu C. Ramanna and Hoeteck Wee for their helpful discussion, and thank Jiangtao Li for his proof-reading at early stage. We also thank all anonymous reviewers of ASIACRYPT 2017 for their valuable comments.