The History of Mahabodhi Temple at Bodh Gaya 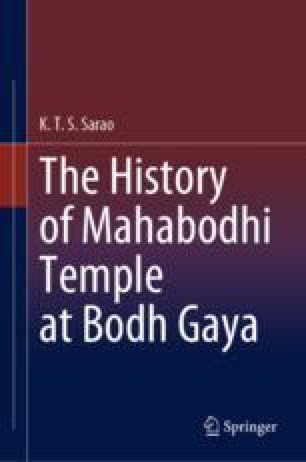 After attaining Enlightenment at the foot of a pīpal caityavṛkṣa and then setting the wheel of the Dharma in motion, the Buddha spent some time in the Gayā Dharmakṣetra. Though he was able to win a few converts like the Tebhātika Jaṭilas, his success appears to have been rather limited in the Gayā Dharmakṣetra. Though devotees began to visit the Mahābodhi during the lifetime of the Buddha, pilgrimage appears to have picked up pace only from the time of Emperor Aśoka when he visited the open-air bodhighara (shrine). By the Gupta period (c. 319–570 CE), the spot of Enlightenment became an established centre of international pilgrimage when, with the blessings of King Samudragupta, the Sri Lankans established an extraterritorial base near the Mahābodhi Tree and took over the control of the bodhighara. Consequently, the Sri Lankans may have played some role in the building of the towered brick Mahābodhi Temple, that appears to have been constructed during the Gupta period. Except the occasional Brāhmaṇical-Hindu influence, the Sri Lankan dominance continued until the temple became derelict due to the Turuṣka raids in Bihar after the twelfth century. Four centuries later, the Śaivite saṅnyāsins began to look after the Temple and international pilgrims began to trickle in again. In the last quarter of the nineteenth century, the Temple was completely refurbished and a new sapling of the Mahābodhi Tree was planted. Around the same time, Anagārika Dharmapāla, under the influence of the Victorian Indologists, began a movement for the control of the Mahābodhi Temple that culminated in the loss of Dharmapāla in the Calcutta High Court. However, the acrimony with regard to the possession of the Mahābodhi Temple continued. Efforts by the Indian National Congress and Hindu Mahasabha were not of much help. After the passage of the Bodh Gaya Temple Act (1949), management of the Temple was brought under the joint control of four Hindus and four Buddhists whose chairman, a ninth member, had to be a Hindu. This advantage was done away with through the Bodhgaya Temple (Amendment) Act of 2013. In June 2002, the Indian UPA Government managed successfully to get the Mahābodhi Temple complex declared as the UNESCO’s World Heritage Monument recognizing it as only a “Buddhist monument” completely doing away with its multi-faith character.

© The Editor(s) (if applicable) and The Author(s), under exclusive license to Springer Nature Singapore Pte Ltd. 2020