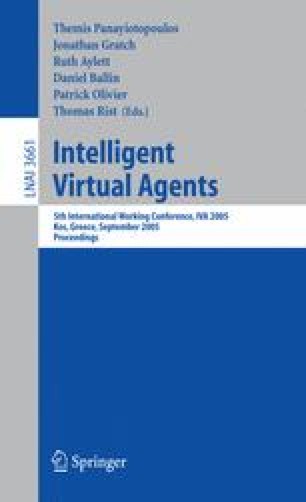 A Model of an Embodied Emotional Agent

We propose a model of embodied agent using SOAR rules engine to define believable behaviour of agents equipped with emotions, motivations, and episodical memory. The aim of our work is to create tools for simulation of virtual human with a believable behaviour which can be used in virtual environment for group meetings training or games.

This work comes from a research project on relational groups of collaborative and emotional agents called GRACE. It is focused on the simulation of the behaviour of an autonomous character evolving in a virtual environment in which users can interact by controlling avatar. One of the goals of this project is to have a believable group’s behaviour by modelling individual behaviour of characters. To improve believability, the modeling of an agent must take into account an emotional module which will introduce a skew into the decision, but also will allow to communicate in a nonverbal way between agents.

The design of the model is done in an incremental way. The basic model will make it possible to select an action among a list of possible actions, and to apply it. Then to obtain a believable behavior one must eliminate the not-relevant actions according to the goals of the agent. Next by associating capacities of anticipation, we will allow it to envisage the consequences of its actions and thus to eliminate those which will have harmful results compared to these goals. The addition of an emotional state will allow to improve the evaluation of the anticipated situations. Taking into account the episodical memory will make it possible to remind the emotional impact of actions carried out in a similar situation. The attentional process will make possible for our model of agent to filter in a more significant way the actions suggested. And finally taking into account the motivations of the agent will make it possible to add and modify goals dynamically during simulation.