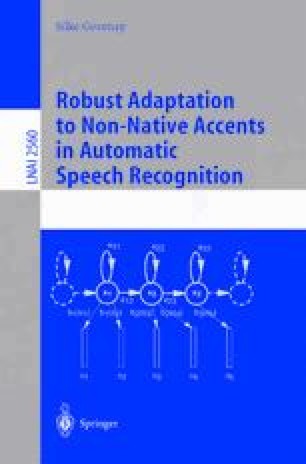 The German database as recorded in the sound proof booth at Sony International (Europe)GmbH. The (naive)speakers had to read isolated words that were printed on the screen.The speech as recorded with a high-quality reference microphone, an array microphone and 4 additional, rather simple PC microphones. For the experiments only the speech recorded with the reference microphone as used,unless stated otherwise. The words to be read by the subjects were isolated words and short phrases. They were manually chosen and mainly cover German street and city names and commands. The commands were chosen from various kinds of consumer electronics manuals to cover as many commands as possible for these devices. Also short utterances like ‘bitte etwas lauter’ (Engl.‘louder please’) were recorded. They were treated as one ‚word’ later during recognition. The address corpus consists of 130 words from hich each speaker had to speak 23. The command corpus consists of 527 entries,of hich 234 had to be spoken by each speaker. Some more corpora, e.g. digits, pin numbers, spelling, numbers, etc. were also recorded. In total, each speaker had to say approximately 500 utterances. Only the addresses and commands were used for testing. The other corpora were used also for training. The detailed statistics about the German database can be found in Table A.1.

Output Node Array Microphone Address Corpus Wide Vocab Phoneme Transcription
These keywords were added by machine and not by the authors. This process is experimental and the keywords may be updated as the learning algorithm improves.
This is a preview of subscription content, log in to check access.