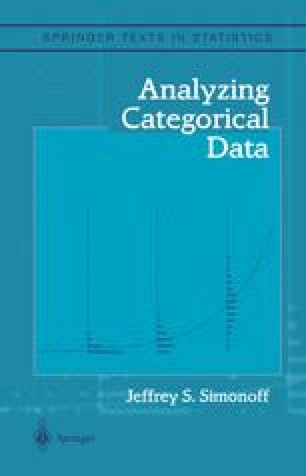 In Chapters 2 and 3 we explored the use of least squares regression to analyze and understand the relationship between a target variable and at least one predicting variable. While it was possible to model the number of deaths monthly from the number of killer tornadoes, there were clear problems in that model fitting, including negative estimated tornado-related deaths, an apparent nonlinear relationship between the target and the predictor, and heteroscedasticity in the residuals from the model. As was noted on page 25, the problem is that least squares is based on a “signal-plusnoise” model using an underlying Gaussian distribution, when the correct analysis uses distributions appropriate for categorical data, such as those discussed in Chapter 4. Before discussing specific models, we present results for a very general regression model, the generalized linear model. In later sections and chapters we will see how these general results apply to specific models for distributions such as the Poisson and binomial.

Count Data Poisson Regression Negative Binomial Regression Poisson Regression Model Linear Predictor
These keywords were added by machine and not by the authors. This process is experimental and the keywords may be updated as the learning algorithm improves.
This is a preview of subscription content, log in to check access.