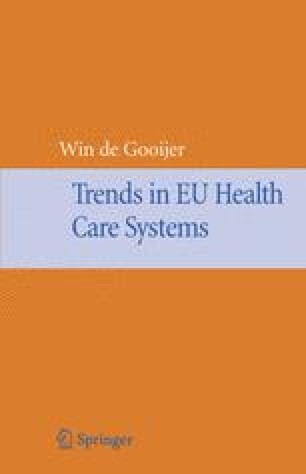 I suggested in chapter ten that the methods used by EU governments to clean up the mess resulting from excessive health care spending from the past, i.e., the period 1960–1980, may have laid the foundations for the creation of another mess in the near future. Methods such as detailed exemption regulations on the finance side to exclude certain groups of vul- nerable citizens from copayments, a forest of regulatory measures to get control over the supply side, as well as an increasingly intense involvement of several stakeholders in the health care process, all cause upward pres- sure on health care costs. These methods also hinder the transparency of health care arrangements in society. Health care managers increasingly experience limitations in their managerial freedom;there is an increasing “burn-out” problem among medical specialists; and there is a slowly but steadily changing staff ratio to the disadvantage of direct care/cure per- sonnel. These are developments which may negatively influence the image of health care. That image has been damaged already by the negative label- ing which has become rather customary over the past decades. Health care delivery is considered to be ineffective and inefficient, doctors’ incomes are assumed to be too high, hospital directors are said to have joined the ranks of overpaid managers from the business community, patients are treated like dirt, hospitals are assumed to be places where one dies very easily, patients’ safety is compromised, insurers charge their clients too much, supervisory boards do not act when necessary, et cetera: these are all expressions of distrust and suspicion regarding the performance of the medical profession in its broadest sense. Although each of these aspects of criticism may be true to some extent and in some cases, it is certainly unjust and unfair to generalize in this respect. Just as there are (in)effective and (in)efficient lawyers and industrial companies, so also there are (in)effective and (in)efficient individual health care providers and hospitals. Besides, if acute care in hospitals is so inefficient, how is it that figures for the period 1960–1980 show a decrease in the average length of stay of approximately 25% for countries like Finland, Germany, and the Netherlands? What is so ineffective if countries like Greece and Spain, over the same period, saw their investment expenditures on medical facilities increase well over 30-and 50-fold respectively-after these countries turned to democracy? What is so ineffective and inefficient about hospi- tal care which is increasingly being delivered through outpatient clinics and day care facilities instead of in hospitals?What about ineffectiveness and inefficiency in hospital care when, in the United States, almost half of all surgery took place on an outpatient basis by 1989, up from 16% in 1980? We do not declare a whole industry inefficient if one of its specific com- panies goes bankrupt.

Health Care Open Communication Supervisory Board Health Care Sector Medical Performance
These keywords were added by machine and not by the authors. This process is experimental and the keywords may be updated as the learning algorithm improves.
This is a preview of subscription content, log in to check access.