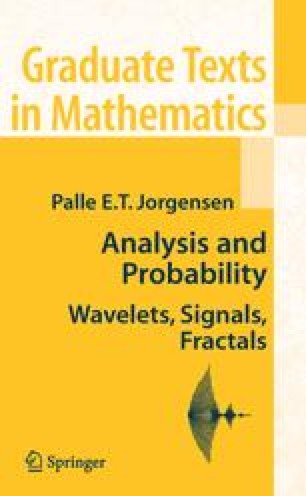 This brief chapter serves as a bridge between the iterated function systems (IFS) in Chapter 4 and the more detailed wavelet analysis in Chapters 7 and 8. We wish to examine a variation of scale, i.e., examine the effect on the Perron-Frobenius-Ruelle theory induced by a change of scale in a wavelet basis. After stating a general result (Theorem 6.1.1), we take a closer look at a single example: Recall that Haar’s wavelet is dyadic, i.e., it is a wavelet basis for L2 (ℝ) which arises from the operations of translation by the integers ℤ, and by scaling with all powers of two, i.e., scaling by 2j, as j ranges over ℤ. But the process begins with the unit box function, say supported in the interval from x=0 to x=1. The scaling by 3, i.e., f→f(x/3), stretches the support to the interval [0, 3]. It is natural to ask what happens to an ONB dyadic wavelet under scaling by 3, i.e., f→f(x/3). This is related to over-sampling: The simplest instance of this is the following scaling of the low-pass filter m0(x), i.e., m0(x)→m0(3x).

Wavelet Basis Haar Wavelet Tight Frame Iterate Function System Frame Wavelet
These keywords were added by machine and not by the authors. This process is experimental and the keywords may be updated as the learning algorithm improves.

Anything that, in happening, causes itself to happen again, happens again. —Douglas Adams