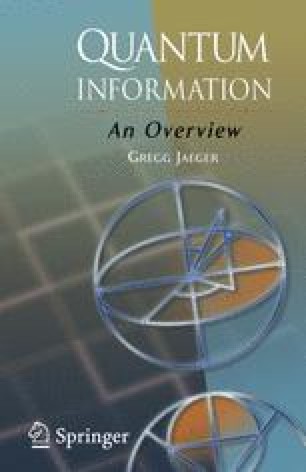 There is no reason in principle why powerful quantum computers cannot be realized, despite the numerous technological challenges involved. As we have seen, the necessary conceptual basis now exists for real-world implementations of nontrivial algorithms that exploit the tremendous parallelism provided by quantum mechanics. Quantum algorithms are procedures for carrying out computations in quantum systems that are implementable as quantum circuits in those cases where finite numbers of gates are required. Fortuitously, the parallelism provided by quantum states grows exponentially with the size of the problem to be solved. However, one cannot simply read out the results from the output quantum states, because the required measurement set will also grow exponentially. Quantum algorithms are thus designed to map such large superposition states back to the computational basis in a way that allows them to be read out efficiently.1 In some cases, quantum algorithms are exponentially faster than any corresponding classical algorithm.

Discrete Fourier Transform Quantum Algorithm Quantum Circuit Classical Algorithm Marked State
These keywords were added by machine and not by the authors. This process is experimental and the keywords may be updated as the learning algorithm improves.

Fourier transforms, in particular, have proven valuable in assisting in achieving final states that can be read out efficiently.