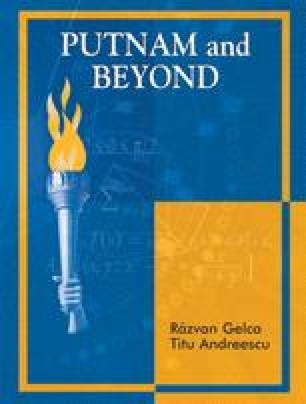 We found it natural, and also friendly, to begin with sequences. As you will discover, the theory of linear recurrences parallels that of linear ordinary differential equations. The theory of limits is well expanded, covering for example Cauchy’s criterion for convergence, the convergence of bounded monotone sequences, the Cesàro—Stolz theorem, and Cantor’s nested intervals theorem. It is followed by some problems about series, with particular attention given to the telescopic method for computing sums and products.

A long discussion is devoted to one-variable functions. You might find the first three sections (on limits, continuity, and the intermediate value property) rather theoretical. Next, you will be required to apply derivatives and their properties to a wide range of examples. Then come integrals, with emphasis placed on computations and inequalities. One-variable real analysis ends with Taylor and Fourier series.

From multivariable differential and integral calculus we cover partial derivatives and their applications, computations of integrals, focusing on change of variables and on Fubini’s theorem, all followed by a section of geometric flavor devoted to Green’s theorem, Stokes’ theorem, and the Gauss—Ostrogradski (divergence) theorem.

The chapter concludes with functional equations, among which will be found Cauchy’s equation, and with ordinary differential and integral equations.

This is a long chapter, with many challenging problems. Now, as you start it, think of Edison’s words: “Opportunity is missed by many people because it is dressed in overalls and looks like work.”

Functional Equation Recurrence Relation Differentiable Function Positive Real Number Real Analysis
These keywords were added by machine and not by the authors. This process is experimental and the keywords may be updated as the learning algorithm improves.
This is a preview of subscription content, log in to check access.