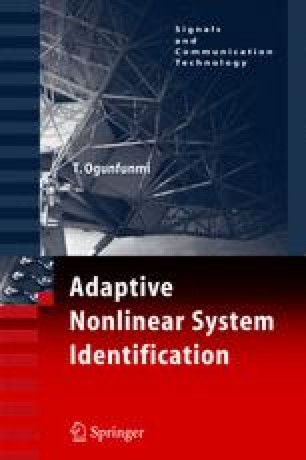 In the previous chapter, we discussed several examples of adaptive nonlinear filtering using the truncated Volterra model. The first major paper to present this kind of adaptive algorithm was the paper by Koh and Powers (Koh 1983, 1985). Since then, there have been several other papers presenting similar algorithms. However, these algorithms have the following limitations: (1) They are over-parameterized (which means the number of coefficients is too high) even for low-order non-linear filters such as second-order. (2) The convergence rate is typically slow especially for stochastic-gradienttype algorithms. (3) They sometimes do not converge or lead to high misadjustment. (4) Their performance is not very good for non-white and/or non-Gaussian inputs.

Adaptive Algorithm Volterra Series Volterra Model Volterra System Autocorrelation Matrix
These keywords were added by machine and not by the authors. This process is experimental and the keywords may be updated as the learning algorithm improves.
This is a preview of subscription content, log in to check access.