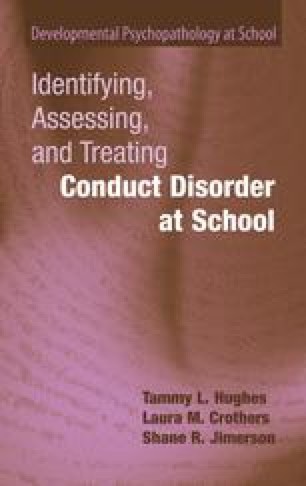 As previously discussed in Chapters 1 and 2, conduct disorder (CD) is a behaviorally defined disorder that appears to have multiple etiologic pathways (Patterson & Yoerger, 2002; Pettit et al., 1997; Rutter et al., 1975), thus, a variety of treatment strategies have been developed. Treatment refers to systematic efforts to reduce, eliminate, or alleviate a particular problem or set of problems. Treating children and adolescents who suffer from CD is a difficult task due to the complexity of factors associated with this particular disorder (Frick, 1998a, 2001; Kazdin, 1995). A variety of treatments have been applied to children and adolescents with CD. However, only a small number of treatments have been shown to reduce CD behaviors. Treatment procedures tend to be most effective when the child is young (under 8 years of age) and early in the development of problem behaviors (Frick, 1998a; Kazdin 1996; McMahon & Wells, 1998). In addition, intervention strategies need to include multimodal and multicomponent efforts that are tailored to the needs of the individual (Connor & Fisher, 1997; Kazdin, 1996, 1997; Miller et al., 1998; Shirk & Russell, 1996). The evidence-based recommendations emphasizing prevention, early intervention, and multimodal and multicomponent efforts are consistent with the central tenets of the transactional-ecological developmental model (cf., Sameroff, 2000) described in Chapter 2. This is particularly important given professional perspectives regarding etiological influences are inevitably intertwined with the selection of intervention strategies; thus, both should be evidence based.

Conduct Disorder Conduct Disorder Emotional Disturbance Psychopathic Trait Parent Management Training
These keywords were added by machine and not by the authors. This process is experimental and the keywords may be updated as the learning algorithm improves.
This is a preview of subscription content, log in to check access.