The Science and Art of Using Telescopes 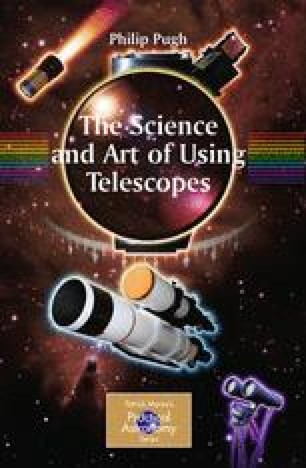 Planets are not as forgiving of modest equipment and poor conditions as the Sun and Moon but, nevertheless, can still provide some interesting viewing. The planets are not as obvious to find as the Sun or Moon and, unlike the stars, move. Fortunately, they move in predictable patterns in relation to the Sun, Moon, and stars.

An appendix called Planetary Data contains details of each planet.

For the Sun and Moon, the observational environment is not that important. Although it is true that pollution and weather are so bad in a few parts of the world as to make even the Sun and Moon invisible, it is not true for the majority of locations. For planets, visibility and the presence of obstructions, such as trees and buildings, are more critical. Again, though most people are lucky enough to be able to see large parts of the sky from their home or that of a friend or relative, some are so closed in by obstructions that they need to find somewhere else to view from. If you have any choice in the matter, if you can choose where you live, look for somewhere with an unobstructed view to the south (north if in the Southern Hemisphere) and as clear an eastern and western horizon as possible.

Chromatic Aberration Small Telescope Synodic Period Venusian Atmosphere Monthly Magazine
These keywords were added by machine and not by the authors. This process is experimental and the keywords may be updated as the learning algorithm improves.
This is a preview of subscription content, log in to check access.