Uranus, Neptune, and Pluto and How to Observe Them 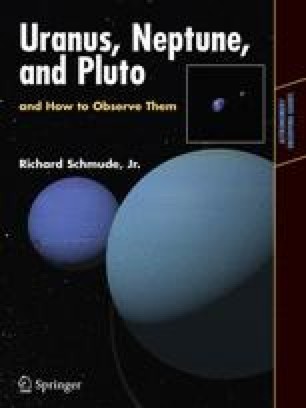 There are several projects involving remote planets that one can do with telescopes having diameters larger than 0.25 m (10 inches). These generally require more light than those described in the previous two chapters. A few of these projects include making drawings and images, measuring ellipticity values, making methane band images, carrying out methane band photometry, making polarization measurements, and timing satellite eclipses and transits. Although few amateurs have telescopes with diameters over 0.5 m (20 inches), there are several astronomy clubs with large telescopes, including the Atlanta Astronomy Club (Georgia), the Fort Bend Astronomy Club (near Houston, Texas) and the Salt Lake City Astronomy Club (Utah). These clubs have their own rules about who can use the telescopes but, in most cases, only club members with some training are allowed to use these instruments. With these large telescopes, one can carry out important work on remote planets.

Large Telescope Occultation Data Amateur Astronomer Global Position Satellite Large Moon
These keywords were added by machine and not by the authors. This process is experimental and the keywords may be updated as the learning algorithm improves.
This is a preview of subscription content, log in to check access.