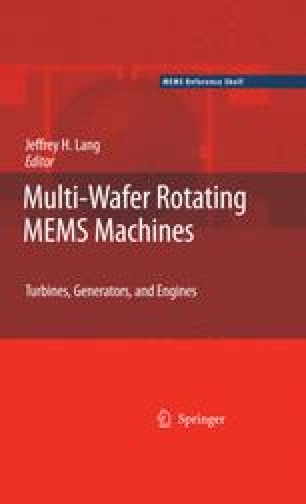 The term “PowerMEMS” was first suggested by Epstein and Senturia [1] in 1996 to describe microsystems which generated power or pumped heat. Their primary interest was micro-electro-mechanical systems (MEMS) heat engines, specifically Brayton cycles (such as gas turbines) and subsystems thereof. The promise identified was microsystems whose power densities equaled or exceeded those of the more familiar large-scale devices. Since that time, the PowerMEMS system has evolved into a broader concept which includes other conventional thermodynamic cycles, new heat engine concepts which may only be attractive at microscale, energy harvesting schemes, and micro-fuel cells – all based on MEMS approaches.

Energy Density Fuel Cell Heat Engine Direct Methanol Fuel Cell Power Converter
These keywords were added by machine and not by the authors. This process is experimental and the keywords may be updated as the learning algorithm improves.
This is a preview of subscription content, log in to check access.