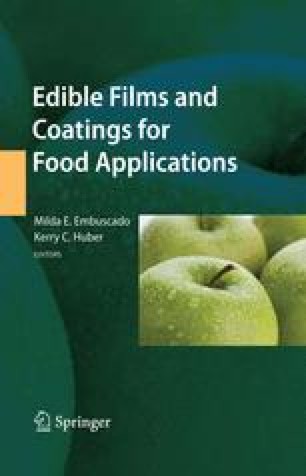 Edible films are defined by two essential elements. First, edible implies that the film, including all of its components, must be safe to eat or that they are “generally recognized as safe” (GRAS), as defined by the U.S. Food and Drug Administration (FDA). Second, edible films must be composed of a film-forming material, typically a water-soluble hydrocolloid or polymer. Further, these films must be manufactured on equipment and in a facility suitable for processing food products.

Edible coatings applied to fruit, vegetables, meat and other food products for improved protection or appearance are often referred to as edible films. For the purposes of this chapter in the book, these applications are not included in this chapter. Edible films can be consumed directly (e.g., a breath freshener film) or can be used to wrap food products, form a pouch or become a component layer in other food products. In most cases, these films are water-soluble and dissolve rapidly in water or in the mouth. However, some components of edible films (e.g., shellac and soy protein) can be insoluble in water, but are digestible when consumed.

Coating Solution Edible Film Polyester Film Sorbitan Monostearate Steel Belt
These keywords were added by machine and not by the authors. This process is experimental and the keywords may be updated as the learning algorithm improves.
This is a preview of subscription content, log in to check access.