A Guide to Radiation Protection 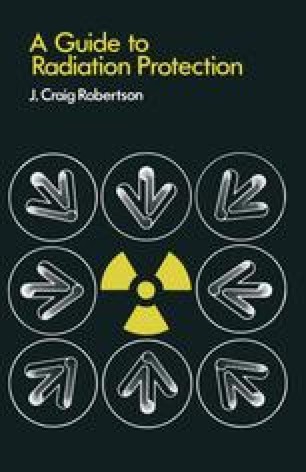 A Guide to Radiation Protection pp 9-13 | Cite as

Well, of course, we all know that the nursery rhyme is not true. But what are things made of? The answer to this question was given a long time ago by chemists who found that all the different types of substances we encounter in our everyday life were combinations of a relatively few number of basic chemical materials called the elements. Salt, for example, is formed by a combination of the elements sodium and chlorine, water from the elements hydrogen and oxygen. Other elements are shown in figure 2.1. Clearly we can now ask, ‘What are the elements made of?’ The answer is atoms. The atoms form the smallest part of the elements and for a long time were thought to be indivisible, but we now know that the atoms themselves have a struc?ture and it is changes in this structure which give rise to radioactivity. At the centre of each atom is the nucleus, and in orbit round the nucleus in a similar manner to the earth round the sun, are the electrons. Each element has a different number of electrons in orbit round the nucleus and it is this fact which results in their different appearance and chemical behaviour. Further scientific research has shown that the nucleus itself has a structure and is composed of neutrons and protons. The combination of protons and neutrons in the nucleus and the electrons in orbit round the nucleus make up the atoms.

What are little boys made of?

That’s what little boys are made of.