On Politics and Society 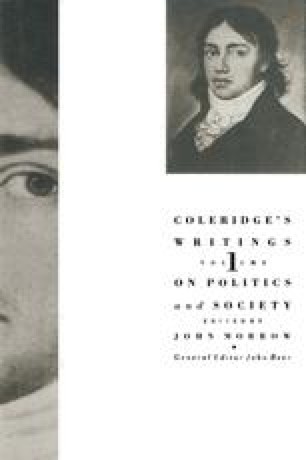 Samuel Taylor Coleridge is, of course, remembered chiefly as a poet. But his poetic achievements were only part of a literary enterprise that began in 1793 (when his first poem was published) and ended with his death in 1834.1 Writings on social and political matters form an important part of Coleridge’s corpus, reflecting his enduring interest in day-to-day politics, and in the more fundamental issues raised by them. The present volume is intended to furnish modern readers with materials for the study of Coleridge’s contributions to social and political theory. It does not collect all his writings in this area, but does include his major statements on questions about the goals and requirements of social and political life — particularly those questions that distinguish theory from commentary. In Coleridge’s case, as in that of many other writers, the intellectual division of labour is not always very clearly demarcated, but it is possible to identify works which deal principally with the ends of politics, the nature of the state, and the bearing of these on institutions and behaviour.

Political Theory Moral Personality Christian Church Moral Feeling Terminological Distinction
These keywords were added by machine and not by the authors. This process is experimental and the keywords may be updated as the learning algorithm improves.
This is a preview of subscription content, log in to check access.