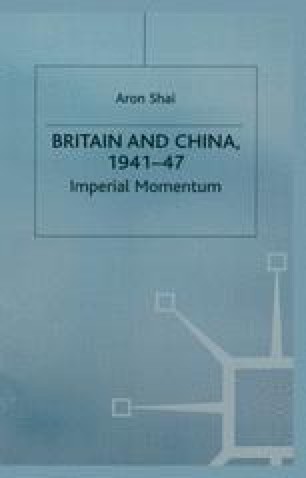 Chinese Market British Policy Commercial Credit Overseas Trade British Position
These keywords were added by machine and not by the authors. This process is experimental and the keywords may be updated as the learning algorithm improves.

The departmental disagreement in London over the question of a loan to China1 was to some extent solved at the ministerial level by October 1944. It was then decided that the limitation originally imposed on the British loan to China would remain explicit in the £50 million loan which was finally completed.2 Two specific possibilities of helping China remained in view of this decision and the run-away inflation which hit that country in the course of the war (purchasing power of the Chinese currency in 1943 was one two-hundred-and-twenty-eighth of the 1937 level).3 The first was that should an international bank be established to extend substantial loans to China, British enterprise might then be encouraged to put substantial efforts in the Chinese market. The second (should the first possibility not materialise) was to supply China against cash or normal short-term commercial credit. This might indeed come as a shock to the Chinese and therefore might not help establish goodwill between China and Britain. Yet, at least, the difficult financial situation in Britain would not worsen on account of bad debts.