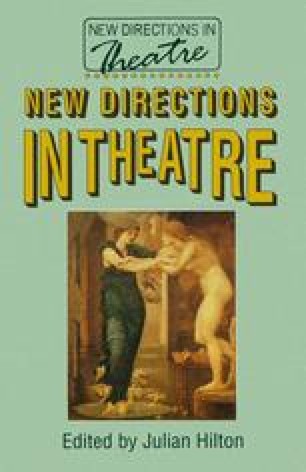 The Aesthetics of Reception and Theatre

Theatre, we all know, is a place where looking (and sometimes seeing) occurs. The Greek root of ‘theatre’ (from a verb meaning ‘to see’) tells us as much, and what Greek pictorial artists were inscribing in the fifth century BC, when they first began to value the spectator in their depictions of mythical and other events, has always been the embodied knowledge of anyone ever occupied with performance: a key structural feature of the art is the dynamic which obtains among participants in a ‘theatre event’, including those performing and otherwise making it happen, and those just ‘out there’ collectively and privately shaping it in their own fashion(s), as ‘productive spectators’. What all ‘reception commentators’ have in common1 — and this would include at one point or another a spectrum of theorists, ranging from semiotic gridmakers to deconstructers of all persuasions — is an inclination to account for the recipient’s part in the complex web which constitutes art as a (more or less) ‘communicative’ sign.2 At one extreme the recipient, the reader or, in our case, audience seems reduced to a kind of thinking flange; at the other, inflated to an undifferentiated mass of subjectivity.3 Patrice Pavis, who knows a thing or two about theatre, sees the need in his semiological ‘game of Chinese boxes’ for reception theory: ‘In fact, the performance text, the metatext of the mise-en-scène … can only be understood in the light of the different mechanisms (perceptual, emotive, textual and ideological) of reception.’4