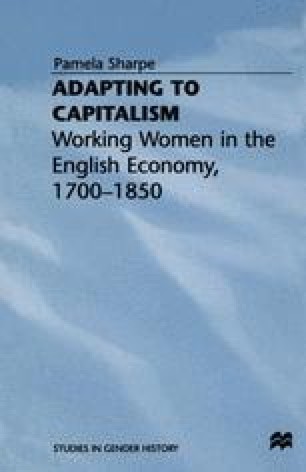 Shifts of Housewifery: Service as a Female Migration Experience

There is no indication whether this letter to a gardener and his wife in the port area of Colchester was from a male or female servant or apprentice. The implication is that he or she went to London after some disagreement either with the family or with an ex-suitor. The servant finds him or herself in a lonely position, significantly ‘with nobody to do nothing for Me’. Service was a double-edged status in the eighteenth century. Poor law records make it clear that even those in fairly lowly positions would buy services, like laundry (hence, presumably, the laundry number to be stitched on to the ‘things’). In a country with a rapidly growing population, and an expanding group of the poor, people in work would be able to find people less well-off than themselves to carry out menial tasks for them. This was also a feature of a developing consumer society.

Eighteenth Century Migration Experience Domestic Service Street Trading Illegitimate Child
These keywords were added by machine and not by the authors. This process is experimental and the keywords may be updated as the learning algorithm improves.

Your Long silence is the ocasion of my wrighting now but I suppose that huy dus not chuse to wright himself and so he whants to persuade you not to wright.

I should be much oblidge to you if you will be so kind as to send my things and if you can send me word about him do & I wish you would wright a Littel ofenr for I have no body to speak to and I can not wright so often as i would because my place is so heavy and I have not time to wright I have nobody to do nothing for Me and I have not mended but three pairs of stockings since I have been at my place I hope these Lins [lines] will meat you alle in good health as I am at present bless God for it for I conclude with my duty to you my Love to brothers, sisters, washing No. 23 ... to morrow is my birth day

Cite this chapter as:
Sharpe P. (1996) Shifts of Housewifery: Service as a Female Migration Experience. In: Adapting to Capitalism. Studies in Gender History. Palgrave Macmillan, London