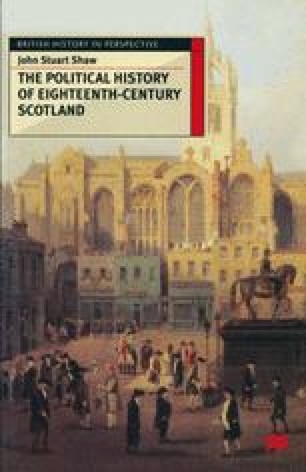 This short chapter allows us to step back a bit from the activities of the political establishment. It provides a reminder of the Jacobite presence during the reigns of the first two Georges; and it deals with the strength of the commitment to Jacobitism in Scotland until it became a spent force after the ’45. The concern is not, however, to spend time on the threat the Jacobites posed to the Hanoverian regime. The aim in considering the strength of Scottish Jacobitism is to emphasise that the ruling regime in Scotland did not have an overwhelming consensus on their side. The Jacobites were a substantial presence in Scottish life and, although the Whigs dominated politics in Scotland as in England from the accession of George I, political accord did not prevail throughout the community. During Ilay’s time as manager, the people in power in the Scottish Hanoverian political elite dealt with unsympathetic elements by means of careful management, persuasion and the use of power where necessary. The resources of the state were great enough to keep Jacobitism in check in England and Scotland in peaceful times.