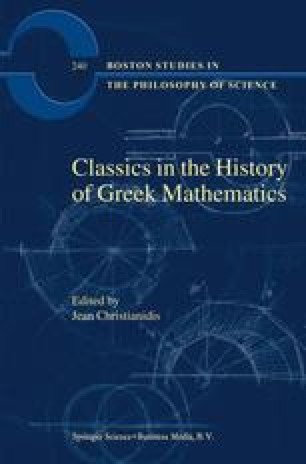 Before I give an account in detail of the different methods which Diophantus employs for the solution of his problems, so far as they can be classified, it is worth while to quote some remarks which Hankel has made in his account of Diophantus1. Hankel, writing with his usual brilliancy, says in the place referred to, “The reader will now be desirous to become acquainted with the classes of indeterminate problems which Diophantus treats of, and with his methods of solution. As regards the first point, we must observe that included in the 130 (or so) indeterminate problems, of which Diophantus treats in his great work, there are over 50 different classes of problems, strung together on no recognisable principle of grouping, except that the solution of the earlier problems facilitates that of the later. The first Book is confined to determinate algebraic equations; Books II. to V. contain for the most part indeterminate problems, in which expressions involving in the first or second degree two or more variables are to be made squares or cubes. Lastly, Book VI. is concerned with right-angled triangles regarded purely arithmetically, in which some linear or quadratic function of the sides is to be made a square or a cube. That is all that we can pronounce about this varied series of problems without exhibiting singly each of the fifty classes. Almost more different in kind than the problems are their solutions, and we are completely unable to give an even tolerably exhaustive review of the different turns which his procedure takes. Of more general comprehensive methods there is in our author no trace discoverable: every question requires a quite special method, which often will not serve even for the most closely allied problems. It is on that | account difficult for a modern mathematician even after studying 100 Diophantine solutions to solve the 101 st problem; and if we have made the attempt, and after some vain endeavours read Diophantus’ own solution, we shall be astonished to see how suddenly he leaves the broad high-road, dashes into a side-path and with a quick turn reaches the goal, often enough a goal with reaching which we should not be content; we expected to have to climb a toilsome path, but to be rewarded at the end by an extensive view; instead of which our guide leads by narrow, strange, but smooth ways to a small eminence; he has finished! He lacks the calm and concentrated energy for a deep plunge into a single important problem; and in this way the reader also hurries with inward unrest from problem to problem, as in a game of riddles, without being able to enjoy the individual one. Diophantus dazzles more than he delights. He is in a wonderful measure shrewd, clever, quick-sighted, indefatigable, but does not penetrate thoroughly or deeply into the root of the matter. As his problems seem framed in obedience to no obvious scientific necessity, but often only for the sake of the solution, the solution itself also lacks completeness and deeper signification. He is a brilliant performer in the art of indeterminate analysis invented by him, but the science has nevertheless been indebted, at least directly, to this brilliant genius for few methods, because he was deficient in the speculative thought which sees in the True more than the Correct. That is the general impression which I have derived from a thorough and repeated study of Diophantus’ arithmetic.”

Absolute Term Simple Equation Determinate Equation Original Expression Pure Equation
These keywords were added by machine and not by the authors. This process is experimental and the keywords may be updated as the learning algorithm improves.
This is a preview of subscription content, log in to check access.

Cite this chapter as:
Heath T.L. (2004) Diophantus’ Methods of Solution. In: Christianidis J. (eds) Classics in the History of Greek Mathematics. Boston Studies in the Philosophy of Science, vol 240. Springer, Dordrecht