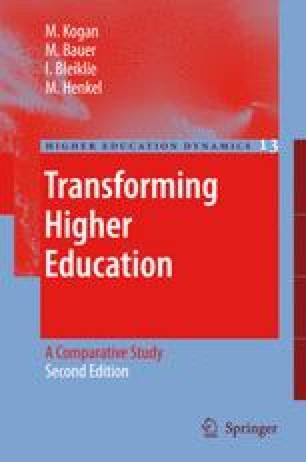 Our central concern in this chapter is to examine the implications of policy change for academics in England, Norway and Sweden in our chosen period. We thus seek to extend our analysis to encompass the individual actors in the basic units of higher education institutions, who create and recreate the experience of higher education and its contribution to societies in their working lives. How far did academic values, self perceptions and modes of working shift in the face of the political and institutional transformations that we have described? In short, how far did policy change permeate academic identities?

Throughout our book we have sought to identify patterns of change and responses to change across differences of national histories, institutions and cultures in which higher education has accumulated different configurations of meaning and purpose. We have seen in the previous chapter how these differences informed and shaped the academic profession in our three countries over time. The national histories of higher education had resulted in different divisions of labour, different understanding of roles and different self images on the part of academics. Academics were working in systems of quite different scales. In England, the ‘golden triangle’ of Oxford, Cambridge and London universities continued to dominate for most of the 20th century. However, stratification was embedded in the whole system and the inter-institutional differences of resource and reputation were taken for granted by academics (Halsey 1992). In both Sweden and Norway, there were strong assumptions of interinstitutional equality, as far as the universities were concerned. The different political responses in the three countries to the idea of ‘the knowledge society’, as it emerged in the 1980s and 1990s, may in part be explained by long-standing differences of belief as to the contribution of advanced knowledge to national goals and differences in the value accorded intellectuals.

High Education Quality Assurance High Education Institution Academic Staff High Education Policy
These keywords were added by machine and not by the authors. This process is experimental and the keywords may be updated as the learning algorithm improves.
This is a preview of subscription content, log in to check access.