After Effects Most Wanted 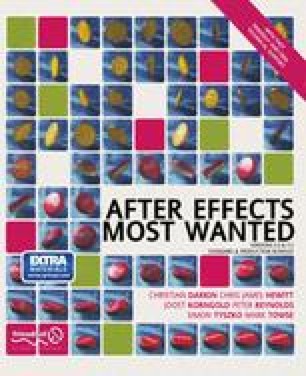 Bigimpact TV is a small new media design agency based just outside London, in the Thames ‘Silicon Valley’. We were approached to create an intro sequence for a TV production company who were making a few shows about the European Snowboarding Championships 2000. We were asked to make the sequence very ‘MTV style’, so lots of movement, lots of excitement and — here’s the stinker — it had to be 52 seconds long. Not normally a problem, but how the hell do you keep a section interesting for 52 seconds without showing a load of snowboarders doing tricks? Not that showing a load of snowboarders doing tricks wouldn’t be interesting, but wouldn’t that just be a little bit predictable?

Static Image Anchor Point Effect Control Color Correction Color Layer
These keywords were added by machine and not by the authors. This process is experimental and the keywords may be updated as the learning algorithm improves.
This is a preview of subscription content, log in to check access.