Caring for the Country 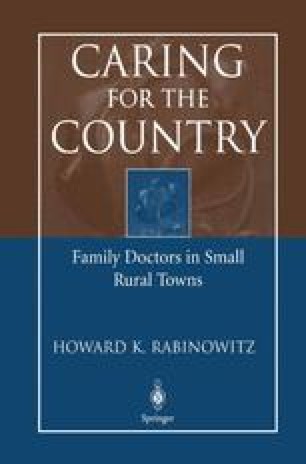 Sitting at the desk in his office, Joe Nutz looks at the two computer monitors sitting side by side on his desk. Both are connected to one computer, one mouse, and one keyboard, and his screen saver—a panoramic picture of his favorite place, Cape Lookout on the North Carolina coast—crosses the two screens, half suspended on each one. As Joe moves the mouse, the different windows he has open—his patient schedule, his e-mail—jump from one monitor to the other, just as if you were alternating between the two windows on a single monitor, except that Joe can see both full windows at the same time. “Actually, I have a new system coming,” he says. “It has four flat-panel LCD monitors that you can put next to each other, because once you have two, all of a sudden the two monitors aren’t good enough, and you want to go to four. I can keep my patient schedule up here on one monitor, my electronic medical records up here on another, I can keep my Web browser open over here, and I have one for doing whatever else I want over here, like my e-mail. Once you get into that, you’ll never want to go back. You just won’t. When you’re on the fly, the fewer clicks the better. It’s all about information.”

Small Town Family Practice Patient Schedule Favorite Place Malpractice Insurance
These keywords were added by machine and not by the authors. This process is experimental and the keywords may be updated as the learning algorithm improves.

I still hope that someday there could be a wedding between scientific proficiency and the sort of earnest solicitude and untiring sympathy of the old country doctor.