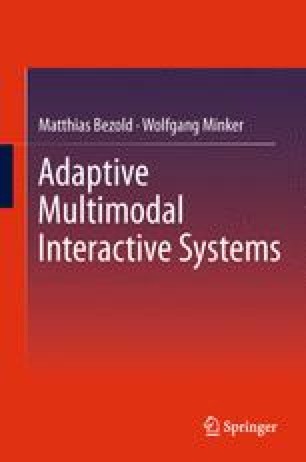 In addition to usability and the selection of useful adaptations, Höök (2000) identifies development methods as a crucial prerequisite for a widespread adoption of adaptive interfaces. We presented an approach for user modeling from basic events in Chapter 3 and a set of adaptation patterns for interactive systems in Chapter 4. On this basis, we devised an adaptation framework as part of this book to allow a developer to integrate the presented approaches into interactive systems more easily and conveniently. This generic adaptation framework provides a reusable platform for adaptive interactive system and improves the task of developing these systems. For this purpose, it integrates user modeling and adaptations. First, using an existing framework reduces the development time, because the developer does not have to implement all the components of the framework. In addition, this framework comprises a number of user modeling algorithms and adaptations, which thus do not have to be implemented. Second, the developer may avoid common pitfalls of adaptation architectures by employing an existing architecture rather than developing a new framework. In addition to supporting developers in creating adaptive interfaces, the framework also serves as a test bed for an evaluation of the adaptation approach. In doing so, the framework shows the feasibility of our adaptation approach.

Interactive System User Modeling Interface Element Adaptation Component Adaptation Selector
These keywords were added by machine and not by the authors. This process is experimental and the keywords may be updated as the learning algorithm improves.
This is a preview of subscription content, log in to check access.