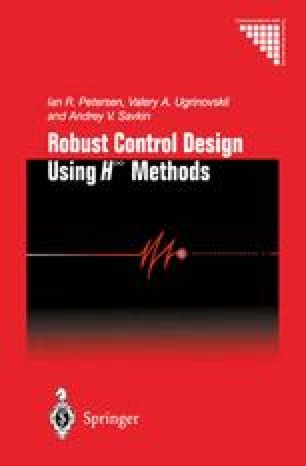 As mentioned in Chapter 1, one approach to the robust linear quadratic regulator problem takes as its launching point the Riccati equation approach to the quadratic stabilization of uncertain systems and its connection to H∞ control; see [150, 143, 102, 252, 253, 41]. In these papers, the controller is obtained by solving a certain game type Riccati equation arising in an associated H∞ control problem. The solution to the Riccati equation also defines a fixed quadratic Lyapunov function for the closed loop uncertain system. Hence, the controller obtained using this approach leads to a quadratically stable closed loop system. This approach can also be used to obtain a controller which not only guarantees robust stability but also guarantees a certain level of robust performance. In this case, the quadratic Lyapunov function is used to give an upper bound on the closed loop value of a quadratic cost functional; e.g., see [35, 13, 14]. Such a controller is referred to as a quadratic guaranteed cost controller. We consider the problem of quadratic guaranteed cost control in Section 5.2. The uncertainties under consideration in Section 5.2 are norm-bounded uncertainties. The main result to be presented on this problem is a Riccati equation approach to the construction of an optimal state-feedback quadratic guaranteed cost control. This result was originally obtained by Petersen and McFarlane in references [155, 154, 156]. Note that the result of Petersen and McFarlane goes beyond the earlier results of [35, 13, 14] in that it leads to an “optimal” quadratic guaranteed cost controller whereas the earlier results were sub-optimal in this sense. That is, for the case of norm-bounded uncertainty, the Riccati equation approach presented in Section 5.2 yields an upper bound on the closed loop value of the cost functional which is at least as good as any that can be obtained via the use of a fixed quadratic Lyapunov function.

Close Loop System Riccati Equation Differential Game Uncertain System Linear Quadratic Regulator
These keywords were added by machine and not by the authors. This process is experimental and the keywords may be updated as the learning algorithm improves.
This is a preview of subscription content, log in to check access.