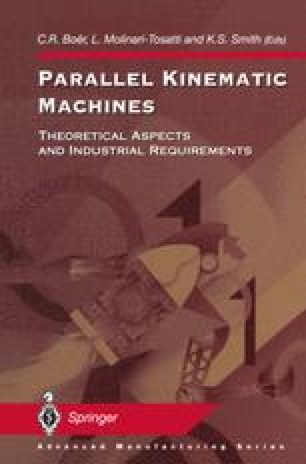 On the Use and Augmentation of Hexapod Machine Tools

The design of high performance machine tools is a challenging task because competing objectives and tight constraints leave little margin for error in the design process. The hexapod is no exception, especially when the objective is to design it as a platform for high-speed machining. When Stewart Platform machines first emerged as a possible machine tool configuration in the early nineties, there was considerable excitement in the machine tool user community about the possibilities they would open up. Machine tool users perpetually seek faster, stiffer and more accurate machines with smaller footprints and greater dexterity, and Stewart Platforms are known to have these attributes. However, designers have always realized that these objectives compete, and informed tradeoffs need to be made to optimize hexapod machine tools for the particular application. The fact that several hexapod machine tools are now in operation in companies, universities and research laboratories worldwide is a testament to the abilities of the design community. However, the tradeoffs in the design of hexapod are mathematically inescapable, and this usually leads to quirks in performance such as an oddly shaped workspace or varying speed capability in the workspace. The goal of our research at MIT is to develop ancillary technologies that permit the effective use of hexapods in the face of these challenges.

Machine Tool Tool Path Generate Tool Path Stewart Platform Rough Path
These keywords were added by machine and not by the authors. This process is experimental and the keywords may be updated as the learning algorithm improves.
This is a preview of subscription content, log in to check access.