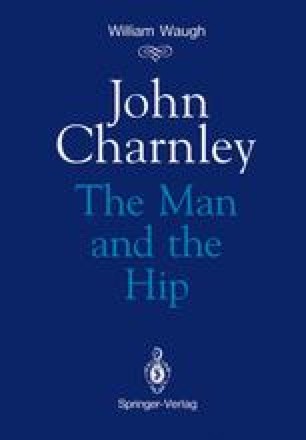 This chapter is not intended to represent an interlude in Charnley’s life; rather it is an interlude between the chapters which describe his orthopaedic accomplishments, and it will deal with rather more personal matters. The period chosen is also somewhat arbitrary, although 1957 marks an important point in his life; we shall, however, go forward beyond the stage we have reached in his surgical career; and return in subsequent chapters to earlier years when he began his work on the low friction arthroplasty. Personal and professional life are inevitably interwoven, but here it seems convenient to consider them, at least to some extent, separately; although aspects of his orthopaedic career and some of the honours he received will be included at the end of this chapter.

Orthopaedic Career Subsequent Chapter British Doctor Family Holiday Manchester Royal Infirmary
These keywords were added by machine and not by the authors. This process is experimental and the keywords may be updated as the learning algorithm improves.

It has been said that the shortcomings of great men are the consolation of ordinary folk. That would explain why people like reading about the eccentricities, bad behaviour, and misfortunes of geniuses.