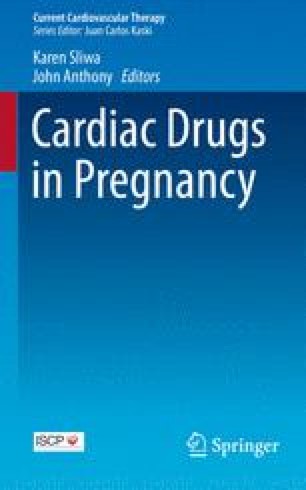 Although coronary artery disease is seldom encountered in women of childbearing age (16–45 years of age), the consequences of coronary disease are considerable, especially in pregnant women. Acute coronary syndrome (ACS) occurring in pregnancy can have devastating effects on mother and child. ACS in pregnancy has other causes than in the non-pregnant state. In the review of Roth and Elkayam only 40 % of the cases (41 of 103 patients) were caused by coronary artery stenosis (Roth and Elkayam 2008). Other causes were thrombus (in 8 % of cases), coronary artery dissection (27 %) and vascular spasm (2 %); normal coronary arteries were found in 13 % of the patients (Roth and Elkayam 2008). Pregnancy has shown to increase the risk of ACS three- to fourfold (James et al. 2006). Between 1991 and 2000 the overall incidence of pregnancy related ACS was reported to be 2.7 per 100,000 deliveries (Ladner et al. 2005). A decade later James et al. published on risk factors for ACS during pregnancy and reported an incidence of 6.2 per 100,000 deliveries between 2000 and 2002 (James et al. 2006). The rising incidence can be explained in three ways: firstly improved diagnostic tests, especially troponin assessment, have resulted in more women with acute chest pain being diagnosed with ACS; secondly, an increase in known cardiovascular risk factors is seen in the pregnant population and finally, maternal age has increased in the Western World (Ventura et al. 2004). The most important risk factors for ACS during pregnancy are hypertension and maternal age (Cecchini et al. 2010). In addition to cardiovascular risk factors, a few obstetric risk factors for ACS during pregnancy have been discovered. The most important is multiparity; others include: a history of preeclampsia, post-partum haemorrhage, transfusions and post-partum infections (Ladner et al. 2005).

Acute Coronary Syndrome Coronary Artery Bypass Grafting Antiarrhythmic Drug Bare Metal Stenting Structural Heart Disease
These keywords were added by machine and not by the authors. This process is experimental and the keywords may be updated as the learning algorithm improves.
This is a preview of subscription content, log in to check access.

US FDA Risk Classification in Pregnancy

The US Department of Health and Human Service have published this classification. (Source: Drug information for the Heath Care Professional; USDPI Vol 1, Micromedex 23rd edn. 01.01.2003). The classification consists of category A (safest) to X (known danger – do not use). The following categories are used for drugs during pregnancy and breastfeeding.

Controlled studies in women fail to demonstrate a risk to the fetus in the first trimester, there is no evidence of a risk in later trimester and, therefore, the possibility of fetal harm appears remote

Category B: no evidence of risk in humans

Either animal reproduction studies have not demonstrated a fetal risk but there are no controlled studies in pregnant women, or animal reproduction studies have shown an adverse effect (other than a decrease in fertility) that was not confirmed in controlled studies in women in the first trimester (and there is no evidence of a risk in later trimester)

Either studies in animals have revealed adverse effects on the fetus (teratogenic) or appropriate animal data are not available. Drugs should be given only if the potential benefit justifies the potential risk to the fetus

There is positive evidence of human fetal risk, but the benefits from use in pregnant women may be acceptable despite the risk (e.g., if the drug is needed in a life-threatening situation or for a serious disease for which safer drugs cannot be used or are ineffective). There will be an appropriate statement in the ‘warnings’ section of the labeling

Studies in animals or human beings have demonstrated fetal abnormalities or there is evidence of fetal risk based on human experience, or both, and the risk of the use of the drug in pregnant women clearly outweighs any possible benefit. The drug is contraindicated in women who are or may be pregnant