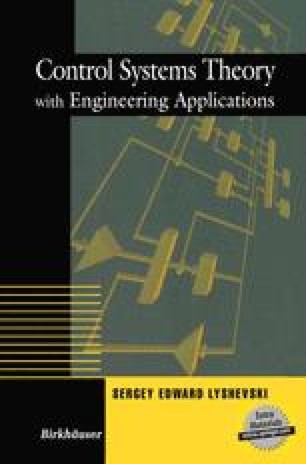 The general results in stability theory were developed by the Ukrainian scientist A. Lyapunov (he was a Professor of Mechanical Engineering at the Kharkov University). Lyapunov formulated a basic concept of stability and derived sufficient stability conditions for dynamic systems described by ordinary differential equations. In recent years, there has been considerable activity in the application of the second method, and innovative methods were developed. The application of efficient and flexible software, such as MATLAB, has changed the aim of the Lyapunov stability theory, and the second method is rarely used for derivation of solutions. Nonlinear differential equations can be solved, and the value of Lyapunov’s theory is shifted from the descriptive theory of solutions of differential equations to convergence and stability analysis as well as to design of stabilizing controllers. The Lyapunov concept is a viable tool in solution of stabilization and optimization problems, encountered in the wide areas of control. In particular, the second method has been applied and extensively used in control, diagnostics, identification, and model reduction of nonlinear systems to analyze different algorithms, as well as to study and visualize the qualitative features of the theoretical developments. For example, control and optimization methods employ the sufficient conditions for stability, as given by the second method, and the design techniques are based on the solution of Lyapunov-type equations or inequalities. Further studies are needed to make the so-called Lyapunov second method available for a wide range of applications and to demonstrate additional capabilities and practical benefits of the Lyapunov theory. The main reason and basic motivation of this section is to apply the Lyapunov concept to nonlinear dynamic systems. It is demonstrated that the application of nonquadratic Lyapunov candidates is an important step to using the full potential of the second method. These allow one to cope with more difficult problems in analysis of nonlinear systems. Nonlinear time-invariant systems were considered in Chapter 4.4 (see Section 4.4.2), where the definitions and the Lyapunov theorem were stated.

Induction Motor Nonlinear Dynamic System Disturbance Attenuation Lyapunov Stability Theory Lyapunov Theory
These keywords were added by machine and not by the authors. This process is experimental and the keywords may be updated as the learning algorithm improves.
This is a preview of subscription content, log in to check access.