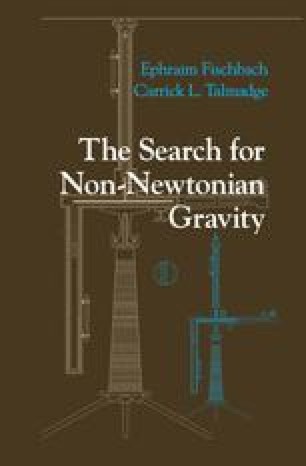 The Search for Non-Newtonian Gravity pp 11-63 | Cite as

In searching for possible deviations from the predictions of Newtonian gravity (or from its generalization Einstein’s General Relativity), we will presume that these arise from a hypothetical new force such as the putative “fifth force,” as discussed in Chapter 1. If any such deviations are eventually established experimentally, it will require further experimental and theoretical work to decide whether they can be understood instead in terms of some generalized theory of gravity such as “supersymmetry” or “supergravity,” as some authors have suggested [ZACHOS, 1978; SCHERK, 1979Á,B; FAYET, 1986Á,B; GOLDMAN, 1986]. For present purposes, it is sufficient to characterize the experimental predictions of any specific theory in terms of relatively simple phenomenological potentials, as we describe below. We can then use experiments to fix the parameters of these potentials, while leaving for later the problem of deriving these parameters from a fundamental theory.

Neutron Star Test Mass Phenomenological Description Anomalous Coupling Yukawa Potential
These keywords were added by machine and not by the authors. This process is experimental and the keywords may be updated as the learning algorithm improves.
This is a preview of subscription content, log in to check access.