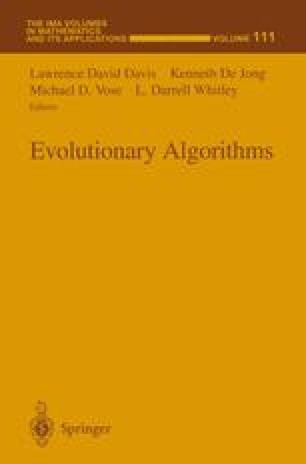 Genetic Algorithms and the Design of Experiments

Chapter
Part of the The IMA Volumes in Mathematics and its Applications book series (IMA, volume 111)

The genetic algorithm (GA) has most often been viewed from a biological perspective. The metaphors of natural selection, cross-breeding and mutation have been helpful in providing a framework in which to explain how and why they work. However, most practical applications of GAs are in the context of optimization, where alternative approaches may prove more effective. In attempting to understand how GAs function as optimizers, several alternative viewpoints have been suggested. In this paper we discuss one of these in some detail—one in which GAs are regarded as a form of sequential experimental design.

The first section of this paper is expository, where we review some of the basic concepts of experimental design as introduced in earlier papers [1, 2] and show how they relate to GAs. We then show how these ideas can be used to investigate the question of how epistasis can be measured, and demonstrate the fact that not all epistasis in necessarily harmful. Using ED concepts we are also able to show that in general it is not possible to determine a priori that a given problem instance is likely to be hard or easy to optimize by means of a GA Finally, we show how the concept of an orthogonal ED can be used to define a lower limit in terms of the necessary amount of computation required to solve an optimization problem.

In the second part, we describe some empirical work in which GAs are compared with ED-based methods. In a typical designed experiment, a fraction of the Universe of all possible solutions is chosen in a way that is thought to enable the identification of important factors (genes in traditional GA terminology) and their associated levels (alleles) in a candidate optimal solution. Generally, this is only the first stage; further tests must be made in order to confirm or reject these tentative conclusions. Sometimes, further experiments are also carried out to refine the values of some of the less important factors.

However, one of the problems with the use of ED for optimization is the sheer amount of human effort needed in order to apply such techniques in this context. For this reason, ED has usually been restricted to fairly small problems (by GA standards). Recently, some suggestions have been made for increasing the range of problems to which ED ideas can be applied by automating some of the decisions customarily made by the experimenter. A GA is also a means for conducting experiments, testing hypotheses (at least implicitly), and identifying candidate optimal solutions. It thus seems appropriate to compare the performance of a GA with ED-based approaches.

We examine an engineering design problem in which one version of the ED-based approach outperformed a GA, and also describe some experiments on artificial test problems of bounded epistasis in which a GA appears much better able to cope with higher-order interactions than ED-based methods.

In conclusion, we discuss the similarities and differences between GAs and ED revealed in the course of this research. One difference in focus is that ED has traditionally been concerned, not merely in finding the best solution, but also in explaining this result in terms of a model. Statisticians have previously seen this as a rather intractable problem for a GA, but recent developments in computer algebra may provide a means for resolving this issue.

Genetic Algorithm Elite Solution Engineering Design Problem Orthogonal Subset Orthogonal Fraction
These keywords were added by machine and not by the authors. This process is experimental and the keywords may be updated as the learning algorithm improves.
This is a preview of subscription content, log in to check access.