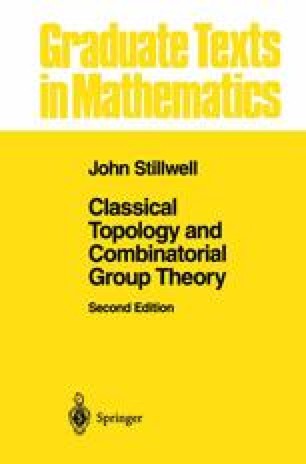 Free groups first appeared in mathematics as subgroups of the modular group in complex function theory. When Dyck 1882 pointed out the fundamental role of free groups in combinatorial group theory, as the most general groups from the point of view of generators and relations, his picture of them remained the function-theoretic one—a tessellation of the unit disc by curvilinear triangles whose sides were circular arcs orthogonal to the disc boundary. The first mathematician to study free groups in their own right and discover significant theorems about them was Jakob Nielsen (see Nielsen 1918, 1919, 1921), in fact the term “free group” did not appear until Nielsen 1924a. Nielsen’s technique is partly geometric (based on the length of words and “cancellation,” see exercise 2.2.4.1 below), however, it suppresses the natural geometric structure of a free group by imposing a “ linear” appearance on the elements as strings of letters.