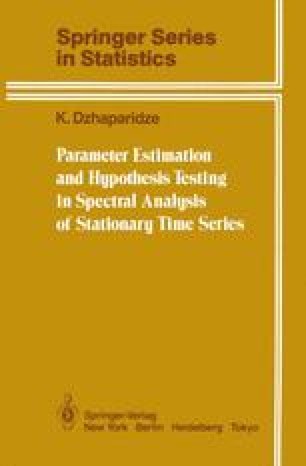 Traditionally the most important problem of mathematical statistics dealing with random stationary processes Xt, t = …,-1,0,1, … is the problem of estimating the second order characteristics, namely the covariance function
$$\beta \left( T \right) = E\{ [{X_t} - E({X_t})][{X_{t + T}} - E\left( {{X_{t + T}}} \right)]\} $$
or its Fourier transform — the spectral density f = f(λ) (under the assumption that the spectral density exists). For this reason, a vast amount of periodical and monographic literature is devoted to the nonparametric statistical problem of estimating the function β(τ) and especially that of f(λ) (see, for example, the books [4,21,22,26,56,77,137,139,140,]). However, the empirical value f n * of the spectral density f obtained by applying a certain statistical procedure to the observed values of the variables X1, … , Xn, usually depends in a complicated manner on the cyclic frequency λ. This fact often presents difficulties in applying the obtained estimate f n * of the function f to the solution of specific problems related to the process Xt.

Spectral Density Gaussian Process Consistent Estimator Linear Process Chapter Versus
These keywords were added by machine and not by the authors. This process is experimental and the keywords may be updated as the learning algorithm improves.
This is a preview of subscription content, log in to check access.