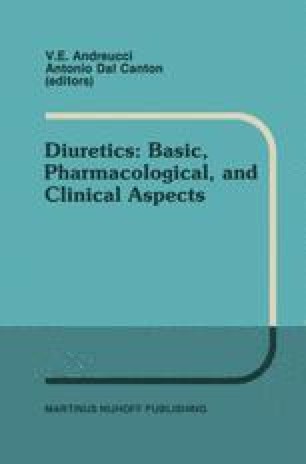 The nature of alkali metal transport across biological membranes has been extensively investigated in-recent years. This research encompasses perhaps the most central issue of physiology as well as reflecting the most primitive function of the cell membrane, namely, ion homeostasis. Most of our understanding of Na+ transport across epithelial tissues has come from morphological and physiological studies of model systems such as the amphibian skin and urinary bladder preparations. The knowledge obtained from these studies has often been extrapolated to other less accessible epithelia such as the renal distal tubule and collecting duct. About 20 years ago, researchers at the pharmaceutical firm of Merck, Sharp and Dohme, synthesized a new K+ sparing diuretic called amiloride. This drug is a very potent and specific inhibitor of Na+ transport in a variety of cellular and epithelial transport systems ranging from human red blood cells to rat caudal epididymis, rabbit embryos to the body wall of annelid worms (1). Amiloride-sensitive Na+ channels are found in Na+ transporting tissues displaying high transepithelial electrical resistance (2). Although the electrophysiology of the channel has been widely studied, the molecular mechanisms underlying the Na+ transport function as well as the primary structure of the channel are unknown.

Wheat Germ Agglutinin Renal Distal Tubule Molecular Weight Peak Caudal Epididymis Specific Binding Activity
These keywords were added by machine and not by the authors. This process is experimental and the keywords may be updated as the learning algorithm improves.
This is a preview of subscription content, log in to check access.