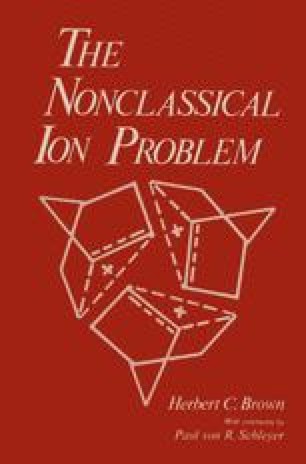 The author cannot resist the prerogative afforded by his position to present the final word. σ-Bridged nonclassical ions were originally proposed to account for fast rates and unusual stereochemistry in solvolytic processes involving carbocationic intermediates. As is evident from the discussion in this book, none of the structures originally proposed and considered are still with us. Indeed, of the two examples believed originally to provide the most convincing cases for such σ-bridged carbocationic intermediates, cyclopropylcarbinyl and 2-norbornyl, Professor Paul Schleyer in his Comments rules out the bicyclobutonium formulation for the former, and in a letter to the author (1975) termed the latter, the 2-norbornyl cation, to be “ambiguous.”