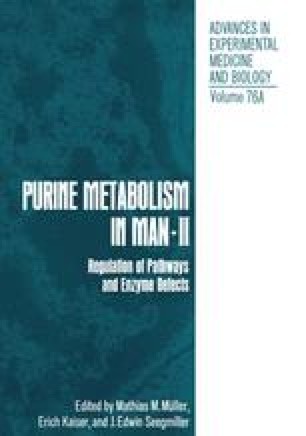 In classic terms, there are potentially three sites at which de novo purine synthesis might be regulated: at the first step committed to IMP synthesis, and at the distal branch point where IMP is converted to adenine and guanine nucleotides. Since the late 1950’s, numerous demonstrations in intact cells of inhibition of the overall rate of de novo synthesis by exogenous purines have been complemented by elegant mechanistic studies with partially purified phosphoribosyl amidotransferase (PAT)1 from several sources, including humans (1,2). Regulation of the branch point has received less attention. IMP dehydrogenase and adenylosuccinate synthetase, the first enzymes committed to GMP and AMP synthesis, respectively, from IMP, have been partially purified and shown to be subject to inhibition by a variety of purine nucleotides (2). However, in the absence of studies in intact cells, schemes for regulation derived from these investigations can only be considered as potential mechanisms and their integration into regulation of the overall pathway cannot be established.