Police Innovation and Control of the Police 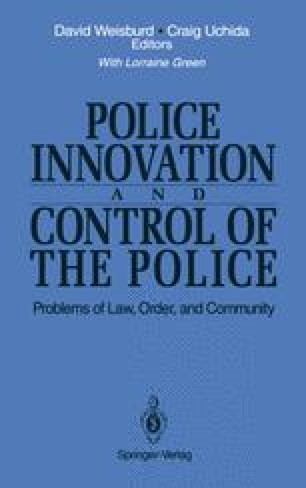 The Soviet Police and the Rule of Law

During Gorbachev’s five years as a reformer (1985–1990), he launched perestroika. This effort to modernize the Soviet economy and transform the nature of Soviet society had the creation of a law-based state as one of its fundamental objectives. Gorbachev believed that economic reform was possible only if the state and its institutions learned to observe and respect the law. Central to this political and legal transformation was a change in the relationship between the citizen and the state. According to this perspective, individuals should not be compelled by the state but should voluntarily comply with legal norms. In return, the executors of state authority—the police and other law enforcement bodies—would be expected to respect individual rights.

Police Force Civil Liberty Internal Affair Legal Norm Party Member
These keywords were added by machine and not by the authors. This process is experimental and the keywords may be updated as the learning algorithm improves.

This chapter was completed in the final period of Gorbachev’s rule and before the demise of the Soviet Union. The piece anticipates many of the problems that made the transformation of the Soviet Union so difficult and its dissolution a possible outcome.

The decline of police authority in the late 1980s and early 1990s and their loss of control contributed to their participation in the coup attempt of August 1991 which accelerated the collapse of the Soviet state. The legacy of the Soviet system still remains in the newly established countries formed out of the former Soviet Union. They are operating with the same law enforcement personnel, often under the same legal codes with the same bureaucracy. The ethnic tensions discussed in this chapter have not disappeared in the post-Soviet state. Rather, in many cases the Soviet legacy and the deliberate policies of the newly independent countries have exacerbated the level of ethnic conflict. The Party apparatus and the Party mandate are gone but the tradition of subservience to authority still prevails among police personnel. Consequently, the obstacles to observing the rule of law are as significant as during the Soviet period, and in many of the new Asian countries, the problems may be more severe than in the period of perestroika.

Cite this chapter as:
Shelley L. (1993) The Soviet Police and the Rule of Law. In: Green L., Weisburd D., Uchida C. (eds) Police Innovation and Control of the Police. Springer, New York, NY