The Art of C Programming 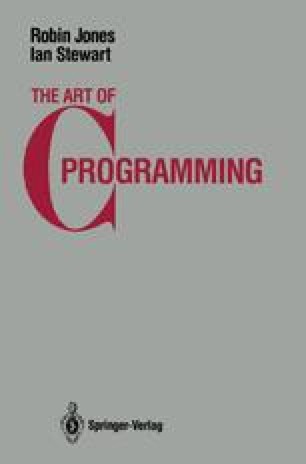 Any high-level language program must be converted to the native code (or machine language) of the processor on which it ultimately is to run. There are two common approaches to this problem (and a number of less common ones which need not concern us here). The first is to store the program, more or less as it is entered, in the computer’s main memory (this is known as source code). Then, when the program is executed, to take each line in turn, translate it into machine code and then run the machine code. When the translation of a line takes place, the resulting machine code overwrites that from the previous line, so that if a line of source code appears in a loop which is executed 200 times, it also must be translated 200 times. A translator which adopts this strategy is called an interpreter* and it’s the mechanism most familiar to anyone who has used a Commodore 64, Macintosh, IBM PC, or any of the other home micros (or personal computers as the upmarket salesmen prefer to call them).

Alice thought she saw a way out of the difficulty, this time. “If you tell me what language ‘fiddle-de-dee’ is, I’ll tell you the French for it!” she exclaimed triumphantly.

Through the Looking Glass

Cite this chapter as:
Jones R., Stewart I. (1987) Compilers and Interpreters. In: The Art of C Programming. Springer, New York, NY