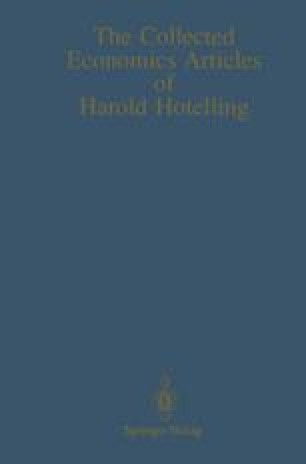 In this paper we shall bring down to date in revised form an argument due essentially to the engineer Jules Dupuit, to the effect that the optimum of the general welfare corresponds to the sale of everything at marginal cost. This means that toll bridges, which have recently been reintroduced around New York, are inefficient reversions; that all taxes on commodities, including sales taxes, are more objectionable than taxes on incomes, inheritances, and the site value of land; and that the latter taxes might well be applied to cover the fixed costs of electric power plants, waterworks, railroads, and other industries in which the fixed costs are large, so as to reduce to the level of marginal cost the prices charged for the services and products of these industries. The common assumption, so often accepted uncritically as a basis of arguments on important public questions, that “every tub must stand on its own bottom,” and that therefore the products of every industry must be sold at prices so high as to cover not only marginal costs but also all the fixed costs, including interest on irrevocable and often hypothetical investments, will thus be seen to be inconsistent with the maximum of social efficiency. A method of measuring the loss of satisfactions resulting from the current scheme of pricing, a loss which appears to be extremely large, will emerge from the analysis. It will appear also that the inefficient plan of requiring that all costs, including fixed overhead, of an industry shall be paid out of the prices of its products is responsible for an important part of the instability which leads to cyclical fluctuations and unemployment of labor and other resources.

Marginal Cost Demand Curve General Welfare Freight Rate Mill Price
These keywords were added by machine and not by the authors. This process is experimental and the keywords may be updated as the learning algorithm improves.

Presented at the meeting of the Econometric Society at Atlantic City, 28 December 1937, by the retiring president.