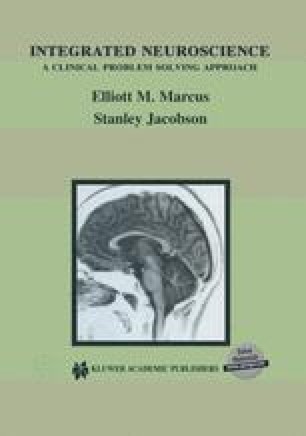 Functional Anatomy of the Brain Stem

This chapter presents an overview of the anatomy of the brain stem and describes certain functional centers. The brain stem consists of medulla, pons and midbrain (Fig 11–1 and 11–2). We will first start at the medul-lospinal junction and then discuss several levels of the medulla, pons, and midbrain. The discussion of each level will include the important functions, nuclei and tracts found in that level. The medulla, pons, and midbrain are subdivided by their relationship to the ventricular system. One division, the tectum, forms the roof and walls or the posterior surface; the other division, the tegmentum, forms the floor or anterior surface. The basis forms the anterior surface of the tegmentum

Brain Stem Cranial Nerve Superior Colliculus Inferior Colliculus Reticular Formation
These keywords were added by machine and not by the authors. This process is experimental and the keywords may be updated as the learning algorithm improves.
This is a preview of subscription content, log in to check access.