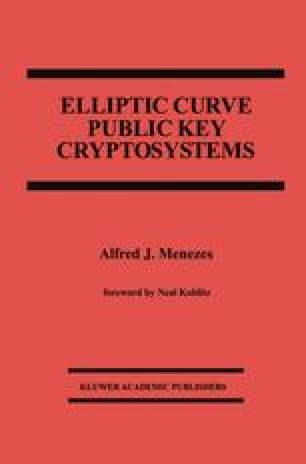 In 1985, Schoof [136] presented a polynomial time algorithm for computing #E(F q ), the number of Fq-rational points on an elliptic curve E defined over the field F q . The algorithm has a running time of 0(log8 q) bit operations, and is rather cumbersome in practice. Buchmann and Muller [20] combined Schoof’s algorithm with Shanks’ baby-step giant-step algorithm, and were able to compute orders of curves over Fp, where p is a 27-decimal digit prime. The algorithm took 4.5 hours on a SUN-1 SPARC-station.

Elliptic Curve Elliptic Curf Abelian Variety Quadratic Residue Modular Equation
These keywords were added by machine and not by the authors. This process is experimental and the keywords may be updated as the learning algorithm improves.
This is a preview of subscription content, log in to check access.