Eicosanoids and Other Bioactive Lipids in Cancer and Radiation Injury 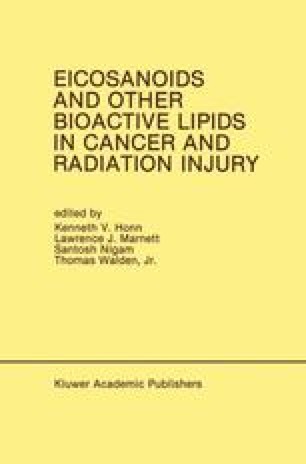 The role of dietary fat in colorectal cancer causation has been problematic. Though cross cultural epidemiologic studies have shown a high correlation between quantity of fat consumption and national cancer rates, within population epidemiologic studies have been far less consistent. Only 7 case control studies have shown a positive correlation between fat consumption and colorectal cancer risk, 10 have not. None of the 4 prospective cohort studies, the strongest epidemiologic tool, have shown a positive correlation. Amongst the strongest epidemiologic evidence for fat as a risk factor is the study of Japanese migrants to Hawaii, where cancer risk in the migrant population has been shown to be associated with increased fat consumption, when compared to low risk Japanese still residing in the same region in Japan. Yet a cohort of that population of Japanese migrants residing in Hawaii followed prospectively has increased their colorectal cancer risk well beyond resident whites, while still consuming almost 25% less fat. For some anatomic sites, the risk of cancer was inversely proportional to fat intake. (1)

Colorectal Cancer Risk Japanese Migrant
These keywords were added by machine and not by the authors. This process is experimental and the keywords may be updated as the learning algorithm improves.
This is a preview of subscription content, log in to check access.