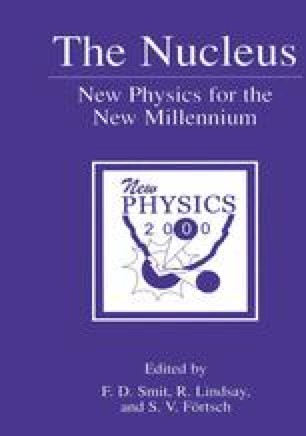 A major drawback of most quantum mechanical measurements is that they produce only quantities averaged over coordinates or time; nuclear physics is no exception. There is, however, an observable (the angular distribution with respect to the deformation axis of single nucleons emitted from metastable states in oriented nuclei) that is directly related to the spatial distribution of the single-particle wave function, as will be shown in this paper. It will also be argued that measuring probability densities of nucleons in nuclei (not only matrix elements) is more promising and that it should become a new trend in evaluating our understanding of nuclear structure in the future.

Angular Distribution Metastable State Deformation Axis Neutron Decay Initial Wave Function
These keywords were added by machine and not by the authors. This process is experimental and the keywords may be updated as the learning algorithm improves.
This is a preview of subscription content, log in to check access.