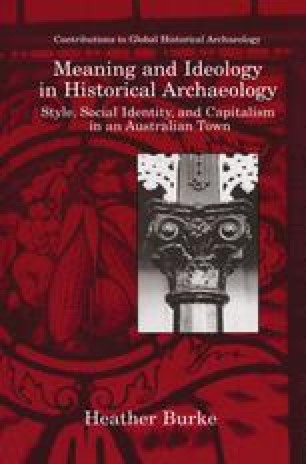 Meaning and Ideology in Historical Archaeology pp 217-230 | Cite as

The notion that the spatial distribution of stylistic elements is not random, but is instead related to the patterning of specific groups, and thus to the way society is organized, is not a new concept (see, for example, Hill 1970; 1972; Longacre 1970; 1972). Linking this variability to issues of social power and to the construction of ideology, however, is a direction becoming increasingly common to archaeological analysis, particularly within historical archaeology. This is one of the main strengths of archaeology, and one of the few contributions it can make to the analysis of ideology, that is, contributing to the understanding of the material character of the production of a social order.

Social Identity Loaded Perception Historical Archaeology Capitalist Society Stylistic Feature
These keywords were added by machine and not by the authors. This process is experimental and the keywords may be updated as the learning algorithm improves.

Successful accounts of ideology must combine two attributes.The first, emphasized by Mannheim, is a hermeneutic subtlety which see both that is necessary to understand ideology before criticizing it and also adopts a self-reflexive attitude towards its own premises.The second, stressed in most strands of the Marxist tradition, is to preserve the concept’s critical potential by linking it with analyses of control and domination,thereby extricating it from the labyrinth of relativism associated with the hermeneutic circle.