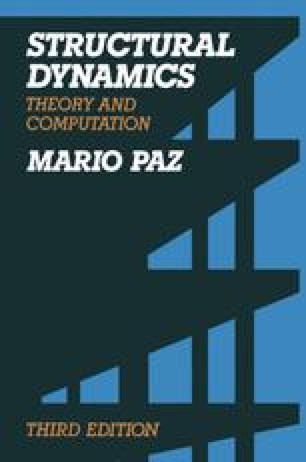 In discussing the dynamic behavior of single degree-of-freedom systems, we assumed that in the model representing the structure, the restoring force was proportional to the displacement. We also assumed the dissipation of energy through a viscous damping mechanism in which the damping force was proportional to the velocity. In addition, the mass in the model was always considered to be unchanging with time. As a consequence of these assumptions, the equation of motion for such a system resulted in a linear, second-order ordinary differential equation with constant coefficients, namely,
$$m\ddot y + c\dot y + ky = F(t)$$
(7.1)
In the previous chapters it was illustrated that for particular forcing functions such as harmonic functions, it was relatively simple to solve this equation and that a general solution always existed in terms of Duhamel’s integral. Equation (7.1) thus represents the dynamic behavior of many structures modeled as a single degree-of-freedom system. There are, however, physical situations for which this linear model does not adequately represent the dynamic characteristics of the structure. The analysis in such cases requires the introduction of a model in which the spring force or the damping force may not remain proportional, respectively, to the displacement or to the velocity. Consequently, the resulting equation of motion will no longer be linear and its mathematical solution, in general, will have a much greater complexity, often requiring a numerical procedure for its integration.

Elastic Behavior Time Increment Plastic Behavior Solve Problem Spring Force
These keywords were added by machine and not by the authors. This process is experimental and the keywords may be updated as the learning algorithm improves.
This is a preview of subscription content, log in to check access.